Don’t panic about the birth of Baby 8 Billion. Before he’s 65 our numbers will be in reverse

Don’t panic about the birth of Baby 8 Billion. Before he’s 65 our numbers will be in reverse 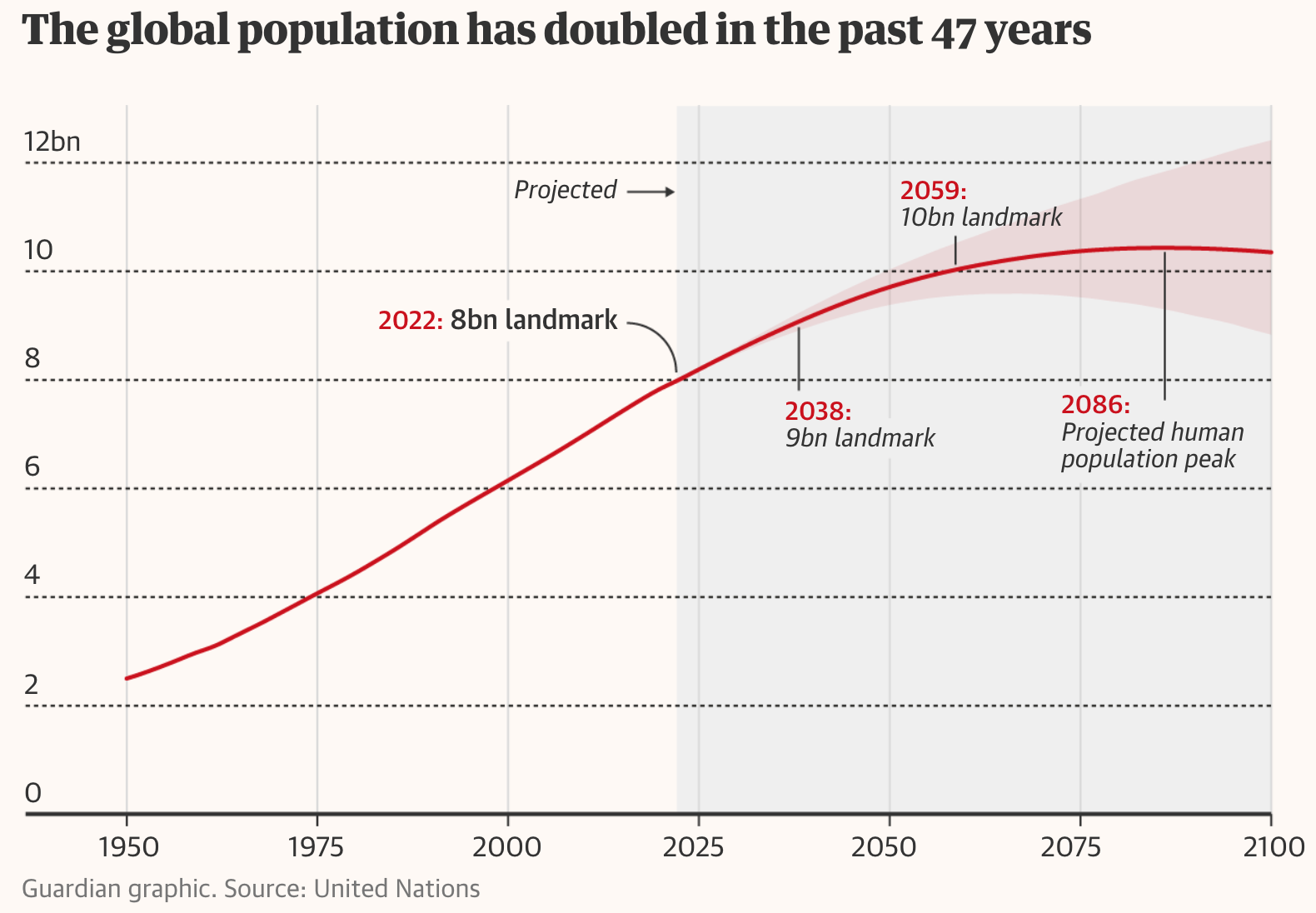 We should not be alarmed at the rise in global population; it’s inequality, greed and waste that are the real problems of our age. 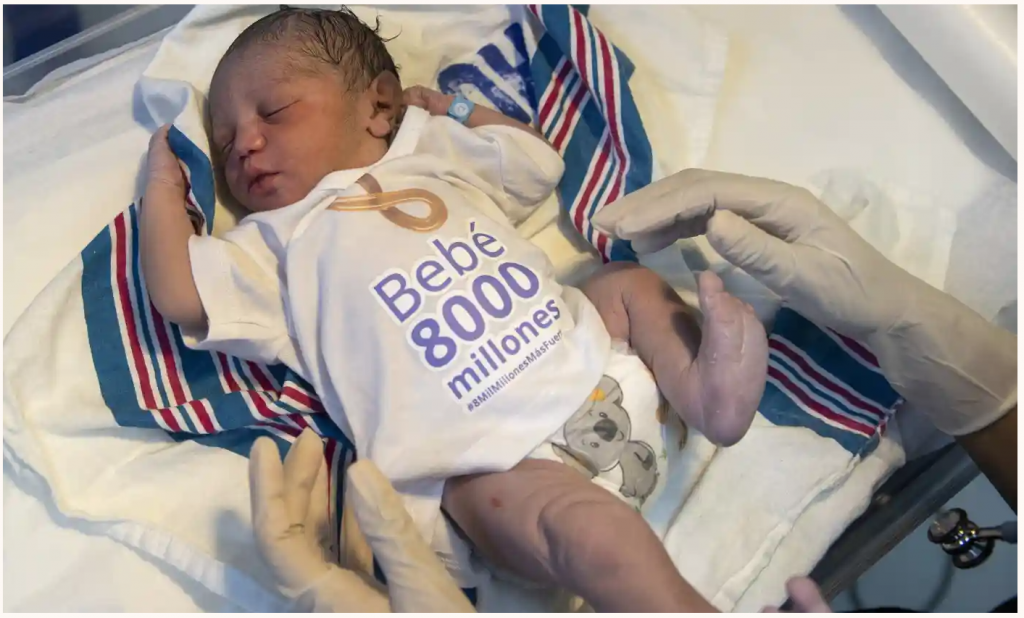 Damian, the first newborn registered in the Dominican Republic on 15 November, was chosen to symbolise the 8 billion milestone, Photograph: Orlando Barría/EPA

The news of the 8 billionth person joining our species last week was a joyous affair, with the UN secretary general, António Guterres, declaring it “an occasion to celebrate”. In contrast, when the global population hit 4, 5, 6 and 7 billion, in 1975, 1987, 1999 and 2011 respectively, there was widespread dismay, although that did reduce with each billion. The doubling of our numbers in 47 years did not bring about the famines and other disasters widely predicted in the 1960s.

As Poonam Muttreja, the executive director of the Population Foundation of India, explained last week, we welcomed the new child whose birth marked this event and we are no longer afraid. We have learned that most of our population growth is not due to births but to most of us living much longer, as the Swedish physician and statistician Hans Rosling so brilliantly explained. When sadly he died in 2017, aged just 68, global average life expectancy was 72.

Collectively we are ageing, but life expectancy growth peaked in 1981. Then, people lived, on average, five years longer than in 1971 (61 years rather than 56). We will not become ever older and the rate of increase has been slowing globally for four decades.

Births peaked in 1990 with an echo of that peak 24 years later. The UN now predicts that there will never again be as many children born in a year as were born in 1990. Globally, births in 2022 were 8.5 million fewer than in 1990, despite there being far more potential parents alive today. Worries about populations growing in countries such as Tanzania are about people living longer, something we should not be concerned about. The average woman in Tanzania in 2020 was a mother to four children, 9% down on a decade earlier. UN projections are for that fall to accelerate to 15% a decade, to an average of 2.3 children in 2080.

One abiding myth is that extra people will inevitably add to carbon pollution. It is a myth sold like snake oil to the mathematically illiterate. “Everyone has a carbon footprint,” the tale begins. Thus, any increase in people must increase carbon pollution. The same could be said for shoes. The myth would be that if there are more people in the world, inevitably there will be more shoes. But most of us do not behave like Imelda Marcos when it comes to shoes. In 2021, 22bn pairs of shoes were produced worldwide, 9% fewer than in 2019. Similarly, our concerns over food, healthcare, education and housing should not be our numbers, but instead our inequality, greed and waste. These are the real problems of our time.

We are ill prepared for the population slowdown. We have been taught to fear an invasion of migrants. But it will be through migration that the slowdown to come is tempered. In Europe from 1946 to 1961, more than 12 million children were born each year. Fewer than 7 million are born a year now and falling. In many parts of Europe, one-child families are the new norm. That is only a problem if you fear migrants.

A few people still suggest that some countries are not doing enough to reduce their populations. But those Cassandras are falling in number even faster than global fertility rates. Like the Trojan priestess, they fear that no one will believe their warnings. Unlike her, they do not have the gift of prophecy – none of us does. However, to date, births are falling fastest where they are most common. They fall even when governments, concerned about supposed virility of their nation, try to encourage more births. 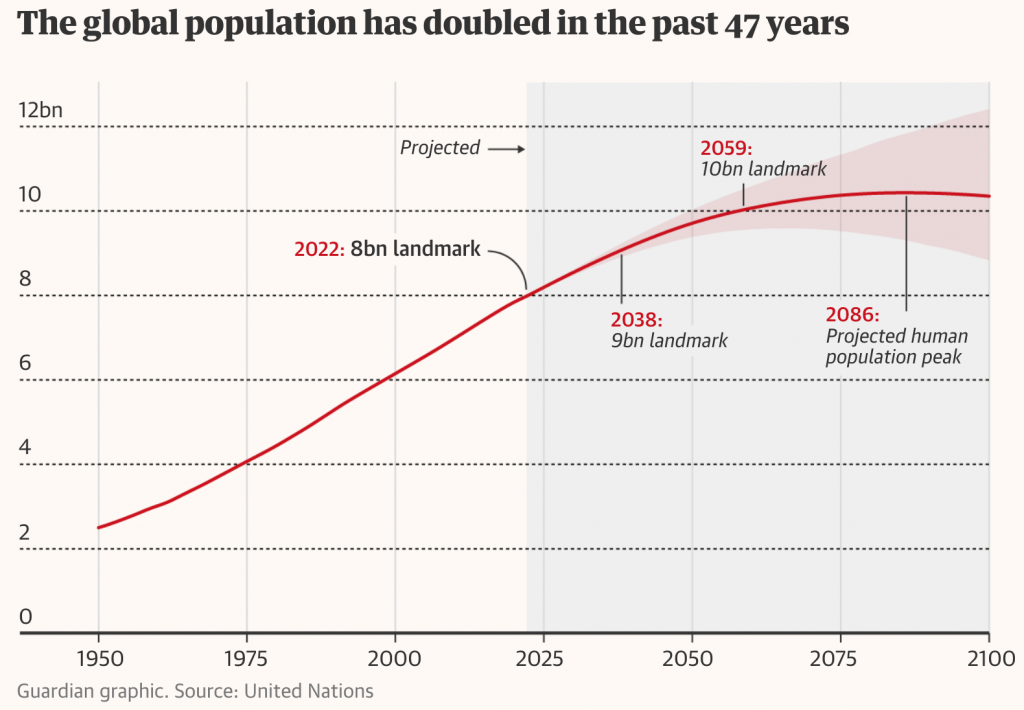 To hold up birthrates, as researchers writing in the BMJ last week explained, “countries with smaller, older populations need to realise the full social and economic potential of all citizens, including migrants and their families”. They cautioned that attempts to limit access to abortion, contraception and sexual education, in Poland in 2021 and the US in 2022, are not just misguided, dangerous and distressing, but futile.

Our worldwide human population explosion began in the 19th century, largely due to the actions of a few men forcing people off the land within their own countries and invading and destabilising more stable societies worldwide. When Europeans settled in colonies around the world, and imposed free trade in goods (including opium) on countries such as China, they caused such chaos that the very slow population growth of the past millennia was transformed into a worldwide population explosion. The global slowdown is due to the actions of billions of women demanding the right to choose how many children they have or if they have children at all.

We will have to wait longer for the next milestones to be passed. With good fortune, I will be 70 when the global population is projected to reach 9 billion in 2038. Perhaps, by then, we will have learned to mark the occasion by celebrating the birthday of an elderly person, rather than suggesting we reach the milestone due to an extra birth?

Most of us old folk will not be around to see the 10 billion number reached in 2059. That 10 billion year could be much later than 2059 or not at all. Successive UN projections have overestimated future population growth because they have repeatedly underestimated just how rapid the fall in births has been. However, almost all children today will live long enough to be alive in the key year, currently projected to be 2086, when for the first time in the recent history of our species the number of humans on Earth falls overall.

No longer rising in our numbers will be as momentous as we imagine colonising another planet or discovering a new continent to be. And is infinitely more likely.

Danny Dorling is Halford Mackinder professor of human geography at Oxford University. He is the author of Population 10 Billion, Injustice: Why Social Inequality Still Persists and A Better Politics

For the original on-line article and a PDF with all references listed click here.