A Tale of Three Elections

A Tale of Three Elections 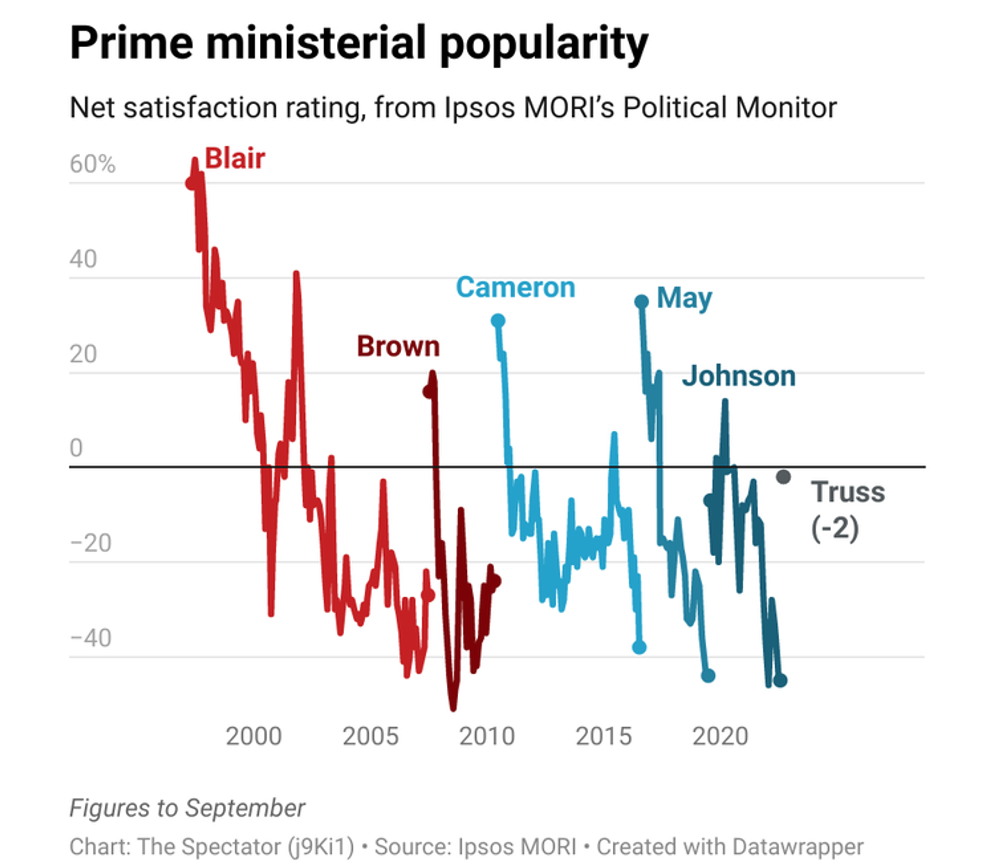 On September 5th 2022 Liz Truss was elected as Prime Minster winning 81,326 votes, as compared to the 60,399 which Conservative party members awarded to the former Chancellor of the Exchequer, Rishi Sunak. On September 11th 2022 Sweden held a general election after which it appeared likely that Ulf Kristersson, the leader of the Moderate Party, would become prime minister, ousting the Social Democratic led coalition from power. On September 25th 2022 a general election was held in Italy with the outcome being that Giorgia Meloni, leader of the ‘Brothers of Italy’, would most likely become Prime Minister. These three events in the same month were suggested to be a sign of a significant shift to the right across Europe; but they were each very different and do not necessarily imply such a shift. If anything, events in the UK may have made the rest of Europe even more cautious about shifting to the right.

In the UK, the election of Truss was a continuation of a chaotic series of events. These included the British Conservative Party leaving the mainstream European Conservative block in 2014; holding a referendum on EU membership in 2016; the UK becoming the second most unequal country in Europe (by income) in 2019 (Bulgaria was worse, but moving in the opposite direction); and the ‘mini-budget’ of September 23rd 2022 that appeared designed to push the UK to the top of the European league table of inequality within months. The International Monetary Fund (IMF) warned the UK government that increasing inequality would undermine its economy further. The UK had lurched to the far-right of European politics; then out of the EU; then out of what the IMF considered rational behaviour.

In contrast that month, in Sweden, 84% of the adult population voted to choose the political parties that would govern them, and in effect who would be prime minster. The shifts in voting were small. The Social Democrats saw their share of the vote rise by 2.0%, that for the more right wing Swedish Democrats by 3.0%, and the Greens by 0.7%. All other parties experienced small falls. Despite both gaining votes, the Social Democrats and Greens, who had formed the government in 2018, lost out because of the slightly larger rise in the Swedish Democrats vote which was just enough to allow it to form a majority coalition with minor parties. This is not a lurch to the right, it is a tiny shift in comparison to what has occurred in the UK. Occasionally, the most extreme parts of some of the more right wing Swedish parties advocate policies that are now common in the UK, for example on immigration. However, Sweden continues to be one of the most equal European countries almost irrespective of which political parties are in power at any particular time.

In the Italian general election of 2022 the swings were far greater. Politics in Italy is far more volatile. After the UK, it is the next most unequal of the larger European countries. The only other European countries where income inequalities are higher than in Italy are Romania, Latvia, Lithuanian and Bulgaria. These four Eastern European countries alongside Italy and the UK are now outliers in Europe. The far-right ‘Brothers of Italy’ saw their vote share rise by 22%, the hard-to-define Five Star Movement vote fell by 17%, and the Democratic centre-left party’s vote rose by 0.3%. The shifts occurred mainly because turnout fell dramatically to 64%. Voters had become disillusioned with all the choices on offer. The net effect was to make a right wing coalition possible; but the Brothers of Italy only hold 119 of the 400 seats in the parliament, less than a third. They cannot govern without wider consensus. Whereas, in the UK, Truss became Prime Minster despite only a minority of her MPs supporting her in the leadership battle (most supported Sunak), let alone any voters other than a tiny number of Conservative party members choosing her.

The last UK Prime Minster to gain power by their party being elected into office and also to lose power by their party being elected out was Edward Heath (1970-1974). For twenty two years no British Prime Minster has enjoyed public support for more than a few short months, almost always only just after they have won an election. The long term trend is downwards. Truss is expected to continue that, possibly taking it to a new all-time low.

In September 2022 Europe had three very different elections and three very different outcomes. The election in Sweden (in which five in every six adult Swedes participated) was reported by the BBC as ‘Sweden election: How an ex neo-Nazi movement became kingmakers’ but only one in every six of the electorate voted for that party, and their leader was not considered a possibility for prime minster.

In Italy less than four in every six people eligible to vote, voted. And again, just one in every six who could vote gave their vote to the party most talked about because of its links to a fascist past. However, because fewer people voted overall in Italy, that party is now the largest party. In the UK two adults in every six in the electorate voted Conservative in 2019, but only one in every six hundred people eligible to vote in general elections, voted for Truss in 2022. The turnout in the 2019 UK general election had fallen to just 67%, not that different to Italy in 2022. There was little comment in the British Press on how some of the policies that Johnson and then Truss supported, such as proposing to forcibly fly some migrants to Rwanda, could be seen as echoes of past far-right minority political parties in Britain. But the international money markets immediately saw her economic policies as far too extreme in other ways to be tolerable. Even the implied future cut in public spending to pay for the tax cuts for the very best-off was seen as a step too far by international bankers because it would weaken the economy and make the UK a more dangerous place in which to invest.

The tax cuts proposed in the UK mini-budget of September 2022 were targeted almost exclusively at the very best-off. Although it appeared superficially that there would also be small gains for other groups, the immediate effect of proposing these tax cuts was to see the value of the pound plummet, increasing the costs of goods for everyone and so leaving only the best-off tenth expecting any possible gain from the proposed tax-cutting. For everyone else in the UK their incomes would fall after taxes and rising prices were taken into account. The chart shown here does not include the effects of rising prices. 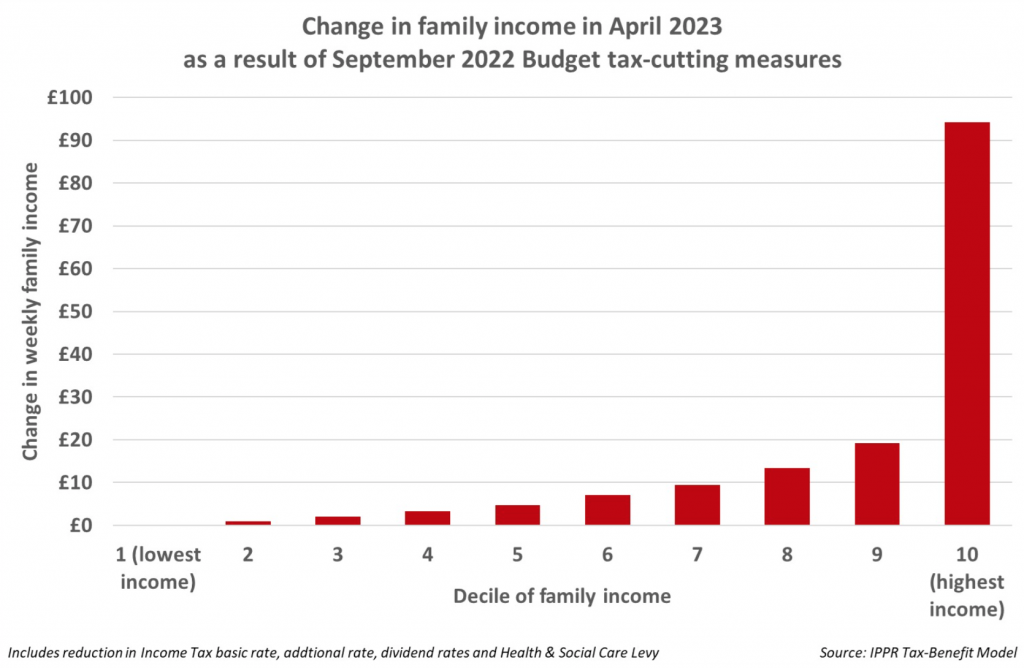 Changes in family income had the September 2022 budget been implemented

These three different elections in September, resulted in three very different outcomes. In Sweden very little at first appeared to change. There was no rise in financial instability or inequality as far as we can see to date. In Italy, talks began to ensure that the new government worked with its predecessor to submit a draft budget to the European Commission in mid-October. The international markets did not react with horror to what had just occurred in Italy. This was despite fears over losses to human rights and much else that was precious as a result of the election.

In the UK inflation rose, the housing market looked to be in trouble with rapid price falls predicted. The Bank of England began the emergency buying of government bonds to ensure pension funds were solvent in the short term. Homes and pensions are the main two ways in which wealth is held in the UK. Share prices also fell. Fuel and food prices rose. I have no idea what else will have occurred between the last day of September, when I wrote these words, and the month in which you read them. Nobody knows. But there was only one entirely disastrous election that took place in Europe in September 2022 – the election of the new British Prime Minister. It gave the world a warning as to what occurs when a particularly extreme right wing path is taken – chaos.

For a PDF of this article and link to the original publication click here.