More people died from the austerity in the five years before the pandemic than have died from COVID since.

Cuts to public services and living standards across Britain from 2010 contributed to 335,000 excess deaths – twice as many as previously thought, according to new research. These austerity measures were introduced by the coalition government elected into office that year, partly in response to the banking crash of 2008.

Previous estimates had suggested that 152,000 people died prematurely between 2015 and 2019 due to austerity. The new study, conducted by researchers at the University of Glasgow and the Glasgow Centre for Population Health and published in the Journal of Epidemiology and Community Health, suggests this was an underestimate and also suggests that austerity had a growing effect over time.

These findings are troubling for several reasons. They suggest that men were much more affected than we first thought. Furthermore, the UK government now plans to embark on a new round of very large public spending cuts. Against this backdrop, these new numbers of excess deaths linked to a previous period of stringent public spending cuts can give us an idea of what might lie ahead this time round too. 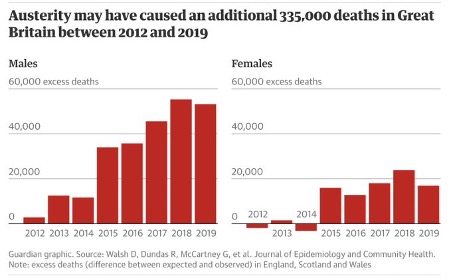 There were actual overall falls in UK life expectancy between 2014 and 2018, with large falls for particular groups such as the poorest tenth of the population, although the health of people living in the best-off areas continued to improve. Previous suggestions that flu or particularly cold winters might have been key reasons don’t stand up to scrutiny, given that, during this period, there was neither an unusual flu outbreak nor any notably cold winter.

Before this new study, some disputed the idea that austerity could be blamed for the increase in deaths by pointing out that most of those who had died prematurely were old and so had benefited from the “triple lock” of the UK state pension.

This safeguarding mechanism was introduced in 2010 to ensure that pensions would rise by the highest of inflation, earnings growth, or 2.5% a year. In theory this meant that pensioners – the over-66s – were sheltered from the effects of austerity. Sadly, that was not true.

Between 2010 and 2020 the average UK pensioner saw their real-terms weekly income (after housing costs) rise by only £12, to £331 a week. That represents a meagre 3.8% rise over the whole decade, which works out to £1.71 extra per day. This in no way compensates for rising fuel and other costs that especially hurt poorer pensioners.

The overall rise in weekly income was this small because other state benefits that pensioners received, and relied upon to ensure they could cope, were reduced in real terms. For example the proportion of pensioners receiving disability payments fell from 23% to 19% between 2010 and 2020.

Poorer pensioners and those in most need were also most harmed by cuts to state services. They lost their adult social worker and carer visits, local government help, and so much else that existed in 2010 – but was largely gone by 2019.

It is now becoming clear that far more people died prematurely due to the direct and indirect effects of austerity and government policy than we had at first believed to be the case. In international comparisons, only in the UK and US were the cuts as bad and their impacts on health and wellbeing so sustained.

Government policy in the US has changed since the election of Joe Biden and his taking office in January 2021. The UK, by contrast, has moved in the opposite direction.

Data reporter John Burn-Murdoch recently argued that, in adopting what might well be “the most extreme economic position of any major party in the developed world”, Liz Truss’s Conservative government has “become unmoored from the British people.”

“The Tories have become unmoored from the British people” Financial Times

More people in Britain died due to austerity in the five years before the pandemic, than died from COVID-19 in the first three years of the pandemic. The effects of austerity continued after the pandemic hit, but initially became harder to discern.

However, in August 2022 the Financial Times published estimates suggesting a large proportion of recent non-COVID-related deaths could be ascribed to just one aspect of austerity: waiting over 12 hours to be seen in accident and emergency departments. 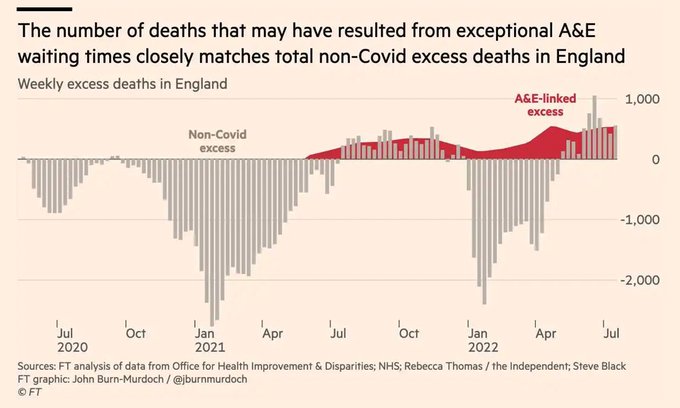 The pandemic has not gone away. Cases are rising again. So too are austerity-related deaths.

Most worrying is the coming winter. The last time the UK suffered a similar energy crisis was during Edward Heath’s term of office (1970-1974). That was also the last time a prime minster in Britain came into office upon winning a general election and left it on losing one.

Today, despite all the deaths from austerity and the pandemic, the UK has a far larger elderly and frail population than it did in the early 1970s. That decade was characterised by much greater social solidarity and income and wealth inequalities were at an all-time low. Life expectancy never fell or even slowed in its rise, despite rising heating costs and power cuts.

The situation we face now is more akin the 1930s. Then, we were as unequal as today. Mortality rates were very high in poorer areas. Most people were poor. There were few average areas. And the very wealthy were protected by their wealth.

For a PDF of this article and the original source click here.