How inequality is killing us

How inequality is killing us

The rise in mortality in 2015 was shocking. In England and Wales (alone) the rise of mortality of 9% in the year to July 2015 was, as far as can be known from published statistics, the largest proportional increase in mortality rates in a year recorded since 1940. In 1940 mortality rose by 16% due to the outbreak of war and bombing. The 2015 death rate increases in Scotland will not be released until August, but the absolute increase in deaths already reported for Scotland was far higher than in England and Wales. The year with the most similar increase in deaths since the World War Two was 1951, when more people died in a flu outbreak in cities such as Liverpool than during the 1918 influenza pandemic. However, in 2015 (unlike 1951), the steepness of the rise in deaths was higher, the rise took place over a more prolonged period and the main cause of death responsible for the increase was not influenza. One reason that the rise in 2015 may have received so little attention is that most of those who died were aged over 65. Have we become more indifferent to others’ suffering, especially when those others are older than most of us?

These are a few of many points made and questions asked in a talk given by Danny Dorling at the annual Ideas for Freedom conference, Student Central, University of London, Mallet Street, London, July 9th, 2016. The talk was based on very recent analysis published in the BMJ on July 8th and results reported earlier in 2016 in the Book: A better politics: How government can make us happier. A low resolution free PDF is available here: https://www.dannydorling.org/books/betterpolitics/ for those who are interested. The audio recording of the talk is available here: 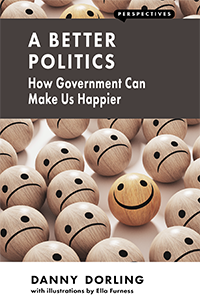