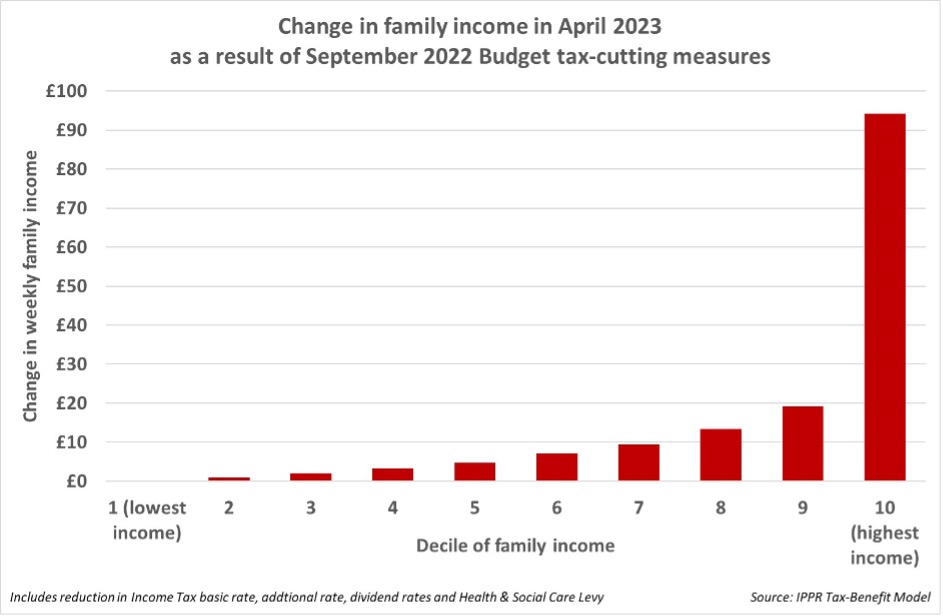 Growing inequality in the UK has implications for health.

The UK currently has the second highest income inequality of any OECD country in Europe. Only Bulgaria is more unequal.1 The government’s economic announcements made on Friday 23 September 2022 may be what is required to ensure that the UK now moves up to the unenviable top spot. This has implications for health because unequal countries tend to have worse health outcomes.https://www.dannydorling.org/books/economicinequality/interactive-charts/figure-5-2.html Although there is debate about the causal mechanisms, the observed relationship is well known. In international comparisons, it is strongest for the youngest age groups who tend to be most affected by the most recent changes.3

The changes announced on Friday included a tightening of the rules on universal credit “which will see benefit payments reduced if people do not fulfil job search commitments.” 4 This will make many already poorer families poorer still, increasing inequalities. Even before the announcements were made, benefit sanctions were being increased rapidly due to more punitive policies being introduced, with the number of people suffering from being sanctioned rising above 100 000 in May 2022; three times higher than the pre-pandemic peak in October 2019.5 Before the changes, it had been projected that 593 000 people would be sanctioned this financial year. Now even more will be sanctioned. Those on the lowest of incomes will suffer the most.6,7

Almost all the other measures announced on Friday were to benefit the richest. The cap on banker’s bonuses was lifted to encourage bankers to gamble more; a planned corporation tax rise was scrapped to allow those wealthy enough to hold shares to take larger dividends; outside of Scotland the top 45% tax rate (that had applied to people earning over £150 000 a year) was abolished; stamp duty thresholds were raised so that the minority of people wealthy enough to still be able to buy a home paid less in tax; and the obscure IR35 rules brought in by the Conservative party themselves in 2017 and 2021 to stop disguised remuneration will be repealed. This last change most favours already highly rewarded consultants. An employment tax partner commented: “today’s announcement could help open the door to those wishing to promote tax avoidance.”8

The changes were designed to increase incomes the most for those at the top of pay scales, to increase them less for those just beneath the top, and to reduce incomes for those at the bottom. The basic rate of tax was lowered to 19% which most increases the incomes of people earning £50 270 a year, at the top of the basic rate band. These changes will not benefit any of the 43% of UK adults who pay no income tax, or the 24% of UK households where no one in the household receives enough to pay income tax.9,10

The indirect effects of the announcements may well have a much greater impact on making the poor poorer. The pound fell to a 37 year low as the announcements were being made.11 Three days later it had fallen to its lowest ever value against the dollar and other currencies. This will increase the cost of imports of basic foodstuff, clothes, and other essentials that make up a much higher proportion of the spending of households on lower incomes. Furthermore, the tax cuts were unfunded, requiring the government to increase borrowing which makes interest rate rises more likely—increasing the costs of mortgages, and therefore also rents.

The changes will also widen policy differences within the UK. In Scotland the top tax rate will not be scrapped. The rate there was already higher than in England.12 Scotland is becoming more progressive, England more regressive. The Scottish government has recently announced that “emergency legislation will be introduced to bring in a freeze on rent increases and ban evictions in the private and social rented sector in response to the cost of living.”13 So rents in Scotland, unlike in England, may well not rise as a result of today’s announcements.

We can only know the direct effects of these policy changes. We cannot know their unintended consequences, up to and possibly even including the shattering of market sentiment further increasing government borrowing costs. Decreasing stamp duty might not actually strengthen the housing market, but instead cause people to question how safe the housing market is. There are many possibilities where the actions taken do not have the consequences planned. However, in the short term, a few people at the very top are about to become richer and even more politically powerful because they are richer. While the large majority of us will be worse-off due to the rise in unsupported borrowing, the cuts to come in public services to reduce that borrowing, or simply because our incomes stagnate while prices rise.