When the old suffer too: the cycle of intergenerational inequality

When the old suffer too: the cycle of intergenerational inequality

There is a time honoured, effective, but ultimately illogical argument made about generations. The argument goes along these lines: An ageing society doesn’t particularly need a vision of the future. It doesn’t need something better to look forward to because it contains so many very old people and they tend to live for today. They know they haven’t got long to go.

In an ageing society one political party emerges as the dominant old people’s party. That party will always present itself as holding what it thinks will be the most popular positions amongst the most elderly in society: pensioners and better-off older workers. These are its core support groups, groups that it thinks will always being growing in size.

The Gerontocracy
So often in countries with an ageing population we are told we are destined to be governed by politicians who will aim to ensure that house prices forever keep rising. We are told that the political party of the old will always try to redistribute monies to pensioners rather than to those who are poorer but are not pensioners; that the long-term consequences of such behaviours are not a concern to the party’s supporters because, demographically, few of this group will be around to suffer those long- term implications. This political party only pays lip -service to climate change.

The party of the old does not really care if there are a lack of new homes to allow people to start new families, if the already low birth-rate continues to fall, or if the introduction of the market into British universities causes some to fail. For them it doesn’t matter if opportunities for younger Britons to work or study abroad shrink.

What does matter to them is that they ensure that the property -rights of its more affluent older voters are preserved abroad over their second and holiday homes. The party of the old is less interested in emigrants, as they are potentially gone for ever politically; but does care about those it calls ex-pats.

Superficially convincing
The argument can be convincing at times and there are often signs that it is credible. The party of the old finds ways to encourage guest -workers to come and carry out work on a temporary basis, hardly ever securing citizenship. Simultaneously, it encourages its older supporters to complain about immigration to distinguish itself from the alternatives.

The old people’s party encourages the young to split their political allegiances between progressive nationalist parties, greens, liberals, social democrats and as many other causes and battles as it can. It often takes part in debate simply to cause rancour and spread division. At the very same time the old people’s party works hardest of all to hide any internal dissent and to ensure that its support-base, if ever split, quickly coalesces politically.

Why is the argument illogical? Here are just a half-dozen reasons: 1) because ageing cannot continue for ever, especially during a pandemic and its aftermath; 2) because the old are not a single block with a single set of interests who do not care about others ; 3) because a depleted society is immediately unable to supply enough of the health and care needs most often required by the old; 4) because the overall harm caused is much greater than any short-term gains made; 5) because all humans need a vision of the future and hope, regardless of their age; 6) because in those counties where a party of the old has emerged, society is actually far more split by income and wealth than it is between young and old.

The USA and UK are now famous for their old-age political parties. However, as the Resolution Foundation demonstrated in July 2022, and illustrated with one single simple devastating graphic (shown below), the UK went from being a relatively equitable state in the 1960s – with low intergenerational inequality and high overall equality – to the most unequal large country in Europe, where over the last twenty years all non-pensioner groups have now seen any income rises end. 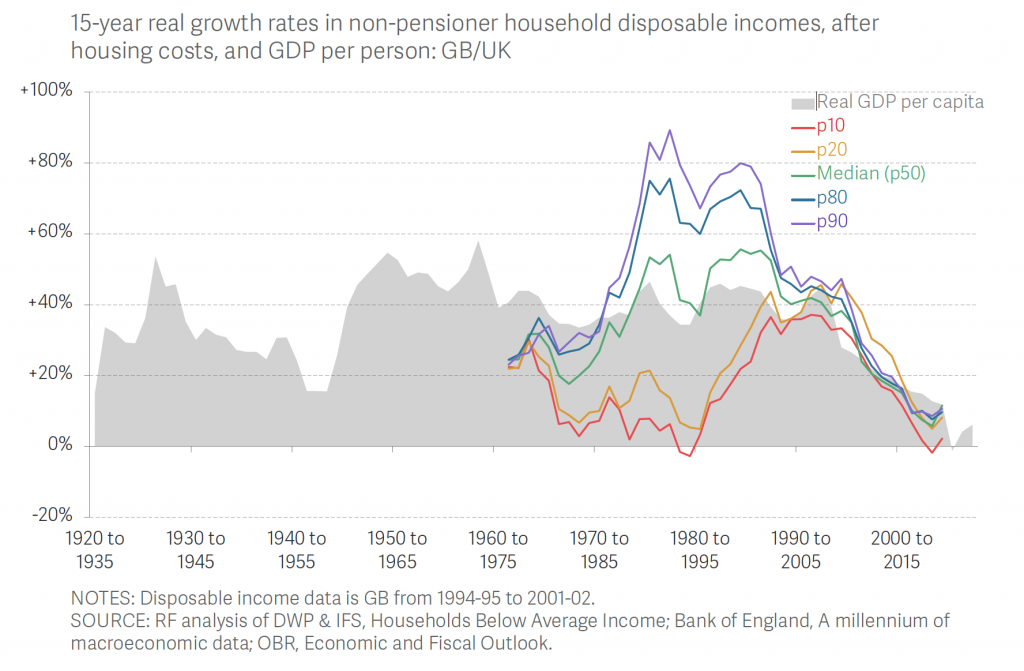 Practically doomed
The five coloured lines in the Resolution Foundation figure above all now running in parallel and all point downwards apart from an upward blip the very latest year, the year before high inflation struck. These lines are the portents for the end of the great lie: that an ageing society will always reward the old.

The richest income group in this figure, labelled ‘p90’ because it is made up of people who are better-off than 90% of others under 65, of non-pensionable age, is the group represented by the line coloured purple in the Resolution Foundation illustration. It is disproportionally made up of people in their 40s, even more in their 50s, and even more in their early 60s. This best-off group is no longer seeing its income diverge from the rest. With inflation they will soon fall.

You cannot skew towards the old for very long and get away with it. Eventually the pile of lies you have built up by promising so much to so many who need do nothing for it other than vote for you, comes crashing down.

Written by Danny Dorling for teh Intergeneration Foundation, published on July 18th 2022

For a PDF file of this article or the original posting click here.