On July 8th 2020 the Treasury released a document titled “Impact of COVID-19 on working household incomes: distributional analysis as of May 2020”. It’s main claim, highlighted on their webpage, was that what the Treasury had done to date had: “supported the poorest working households the most (as a proportion of February income)”.

So – is this claim actually true? The Treasury report is only 7 pages long. At times you have to read between the lines and it helps to know a little about the data sources they used. At no point in the seven pages do its authors define what they mean by “working households”, their object of analysis. The reader is left to assume it is household in which at least one person was still in paid employment by May 2020. 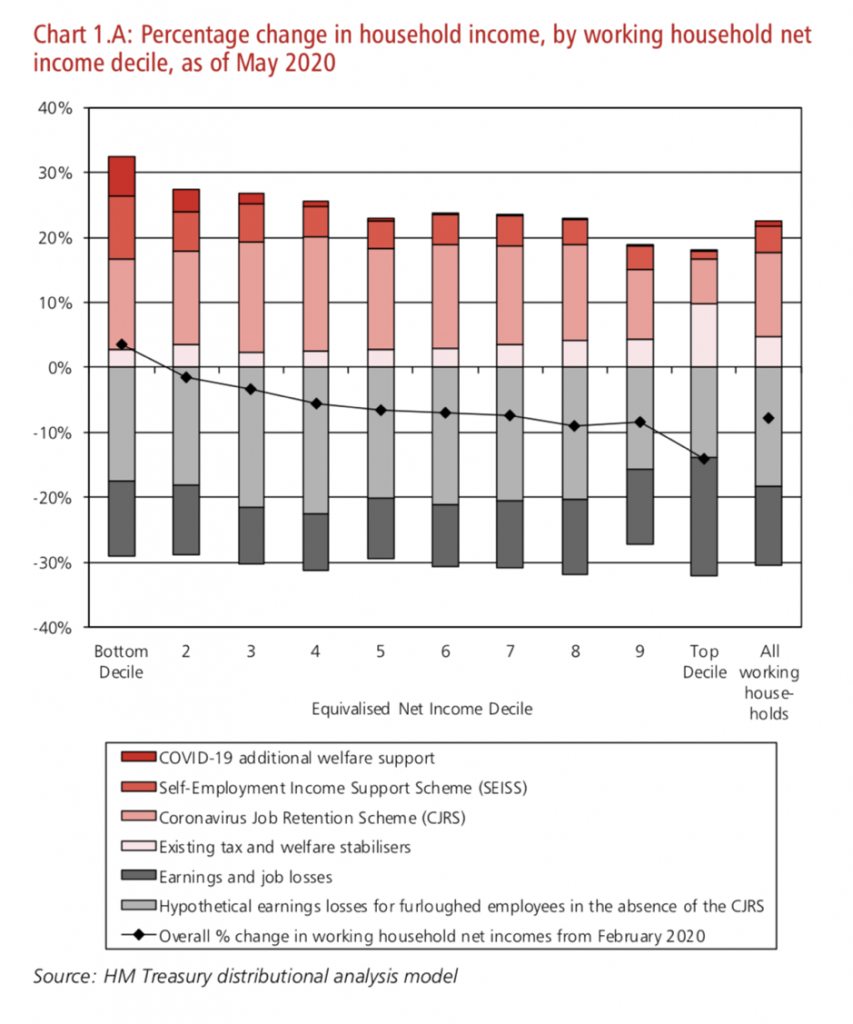 Reproduced here, Chart 1A in the Treasury report superficially suggests that, as a proportion of income, it is the poorest tenth of households that have benefitted most from government largess. However, for them and the next worst-off tenth of households, the Treasury’s estimate of benefits received from the “Coronavirus Job Retention Scheme” otherwise known as furlough is smaller, even as a proportion of their already lowest incomes, than for all other groups of households other than for the best-off two deciles. You can see this simply by looking carefully at Chart 1A. At the same time, the second best-off decile (which for a single person household means someone receiving £52,500 a year) has seen the smallest fall in income, and the best of tenth of household (with median £80,200 a year income for a single person) have benefited the most by being able to offset any losses by paying less tax; £8,000 less to be precise; or about £18,000 less tax for the best-off two adult households with two children. The Treasury’s table of average households incomes is given below which is what you need to know along with Chart 1A to make these calculations.

Households in the lowest deciles are claimed to have received the most from government because of schemes such as “temporary increase in the Universal Credit standard allowance by £20 a week” which, if it were to last for a year for those households who received it, would mean they would receive and additional £1000 through spring 2021 – paltry compared to that saved by already paying £18,000 less in tax for the well-off! However, what matters most in the Treasury’s assumptions is that they believe the self-employment support scheme will most help the poorest two deciles of households! Take away that assumption – which comes from the fact that a few (occasionally very well-off) self-employed people always report ridiculously low incomes to avoid paying tax – and the Treasury claim to have aided a progressive redistribution evaporates entirely.

The Treasury does helpfully produce a second chart, Chart 1B, which shows average welfare support for the poorest tenth of household with someone in work to be only £20 a week when all benefits are included, not just the temporary Universal Credit rise, but also a temporary increase in Working Tax Credit and increase in Local Housing allowances and all other benefits combined. That average £20 a week is paltry. If we also assume the poorest households and not those with some of the largest self-employed incomes in the UK, then Chart 1B shows us that households in the bottom decile have received less than half what households in the middle have received from government and four times less than the very generous £330 a week the best-off tenth of households have received since the crisis began. 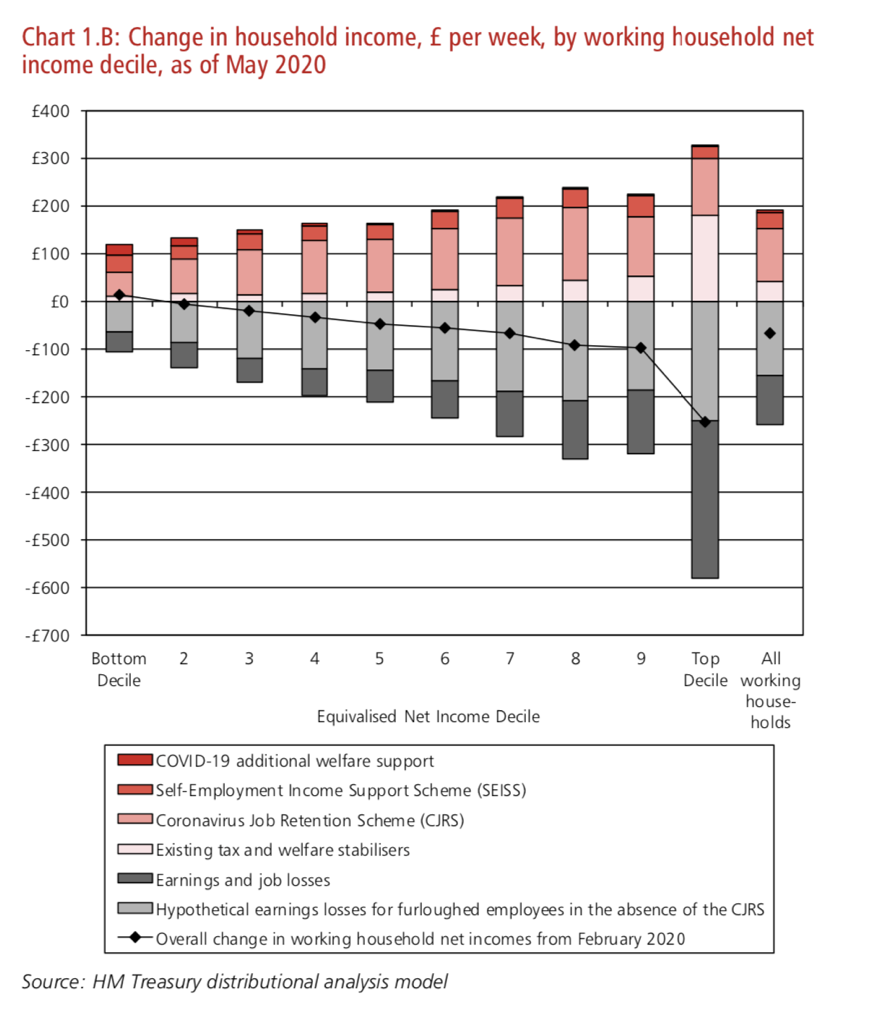 The Treasury analysis ignored work published 4 days earlier by the Standard Life Foundation who have been funding large independent surveys indicating that an additional four million households (possibly more than ten million people) have now been thrown into serious financial difficulty by the crisis. This raised the total number of UK households who would be in serious financial difficulties by the end of July to ten million in total, or around twenty five million individuals. Such a trend only has to continue for a few more weeks in its current direction for a majority of people in the UK, by the time you are reading these words, to be classed as “struggling to make ends meet” given what has now happened to their income

A few days later, on Monday July 13th, the Standard Life Foundation reported its independent analysis of the Labour Force Survey. It found that 140,000 low paid jobs had been lost by April alone and that “This fall is in spite of the measures put in place to protect jobs (the Job Retention Scheme and Self-Employment Income Support Scheme), suggesting that there is a sizeable group of low income workers missing out on support.” And also that the well-off had seen no reduction in employment – in other words inequalities had risen.

Of course, the 140,000 low paid jobs that have very recently been lost have removed households from the “working household” definition used by the Treasury so these are not considered in the poorest groups now – artificially inflating the estimates of their income. Table 1.A shows those Treasury estimates that both ignore the poorest with no work and the very richest who are not in these surveys. Nevertheless, the inequality gap is huge. 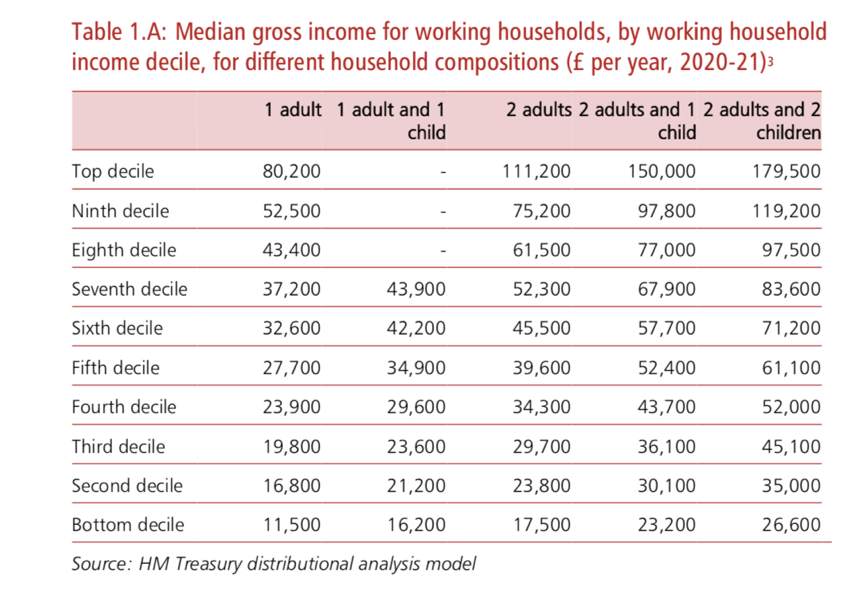 I am far from the only one not convinced by the Treasury rhetoric and what they produce as “analysis”. On Thursday 23 July the BBC reported that Mel Stride, Chair of the Treasury Committee said that the Chancellor “Mr Sunak was turning his back on people in need.” This was in response to Mr Sunak’s dismissal of the Treasury Committee’s interim report into gaps in support to firms and workers hit by the virus which had been published a week earlier. As a result over a million people lost out on any support.

In case one Parliamentary committee’s verdict is not enough to convince you, on that same day (23 July) the House of Commons Public Accounts Committee said the economic reaction of the UK government to Covid-19 had been unduly delayed until March and was then unnecessarily rushed meaning the impact of the mistakes made could stretch into the long-term. Overall that committee described the economic planning of the government as “an astonishing failure”.

As I write, reports of furlough fraud are rising. The first arrest was made on July 8th (the same date as the Treasury report was released) of a 57 year old man accused of fraudulently claiming £495,000 (which would of course put his household well into the top 1% of income earners). In June it was reported that: “According to a survey by Crossland Employment Solicitors, 34% of employees have been asked by their bosses to work while being furloughed by their company. At one manufacturing firm, staff received a 20% pay cut as well as being expected to continue working while furloughed. And some employees working for firms with a sponsor licence had been threatened with deportation unless they agreed to the furlough fraud.” Those who make money out of the crisis by fraudulent means will tend to be working in the private sector and already receiving the highest income – although of course they would not report that in a household survey!

The UK was the most unequal country in Europe by household income before the crisis began. Job losses and supposedly temporary furlough layoffs have most effected the poorest households. The best-off households have seen their saving rise during this period as their spending has fallen (far fewer fancy dinners out and no visits to the theatre). The Treasury’s response has been to try to keep as many people where they were in the pecking-order – a little like letting out the safety car in a stock-car race and not allowing any overtaking; but they have actually managed to do is to widen the gaps and also not prevent many of the poorest falling even further behind and falling below. And all this before the furlough scheme even begins to be reduced and then end, before mass unemployment begins, before school and university leavers enter a job market with fewer labour ‘buyers’ and before the Treasury officials tasked with the job of trying to explain how well they have done presumably begin to tear they hair out wondering how on earth they will be able to continue to produce graphs that fail to convince all but the most gullible.

At the end of their report the Treasury suggests that “…the broad distributional picture outlined here is consistent with several similar studies” and they cite two studies. What the first study they cite actually says is that “The pattern of income changes is rather different from that shown in Figure 1 [similar to the Treasury analysis] because the re-ranking effect is so large. Figure 2 shows that the crisis is simulated to lead to a considerable rise in the number of adults with very low disposable income (caused by those who lose all their earnings as a result of the crisis), such that the greatest fall is seen among the bottom decile.” (on page 18 of this report).

The second report to which the Treasury points as supposedly being collaborative explains: “Taking everything into consideration, the financial situations of low- and high-income households may well be evolving quite differently over the crisis. On the other side of the balance sheet, low-income households are likely to struggle more to cut back spending if they do suffer falls in incomes – given that more of their spending goes on necessities – while those on higher incomes might find themselves spending less fairly automatically as a result of the prohibition of many recreational activities. Indeed, those on higher incomes have been more likely to report that they are now spending less.” (on page 24 of this report). 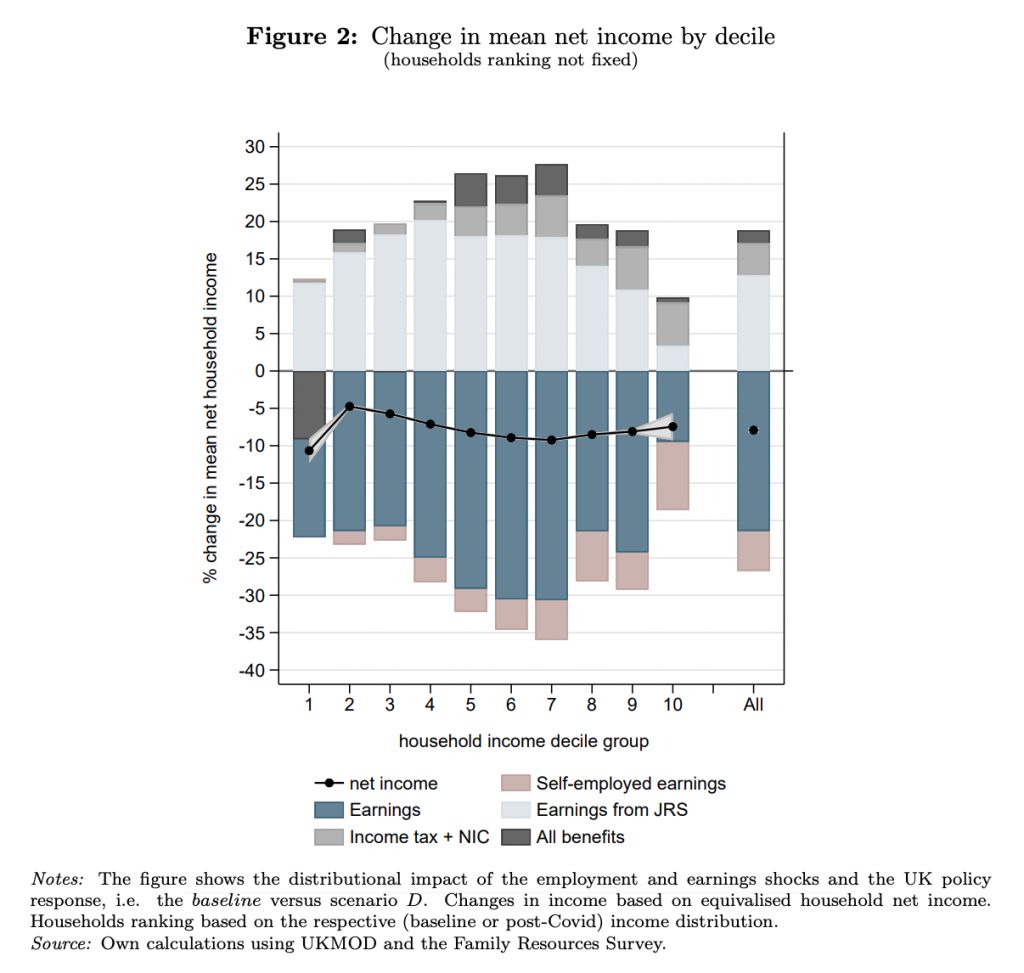 I have run out of space. If you wanted to know what the Treasury could have done instead here are just one or two pointers; but they could also have looked other European countries.

For the original posting of this article and a PDF of it click here.