For a few hours on Wednesday 30 June 2021, a report released by University College London’s Institute of Health Equity hit the headlines. “‘Jaw-dropping’ fall in life expectancy in poor areas of England,” reported The Guardian.

The key statistic in the UCL report was that deaths involving COVID-19 had resulted in life expectancy in the north-west region of England falling by 1.6 years for men and 1.2 years for women. This is around 25% worse than for England as a whole, where life expectancy had fallen by 1.3 years and 0.9 years, for men and women respectively.

Paraphrasing the report’s author, leading public health expert Professor Marmot, the Greater Manchester Health and Social Care Partnership, which commissioned the report, said: “If the government is serious about levelling up health inequities, equity of health and wellbeing must be at the heart of government and business strategy rather than narrow economic goals.”

But that “if” is doing a lot of heavy lifting here. Marmot’s report is especially sceptical of the government’s “levelling up agenda”, highlighting the need for social investment in prevention, health, and care, particularly in poorer areas, and not just a few infrastructure projects.

If you want to see how serious the government is about “levelling up”, just look at how little money it has committed to investing in the ‘Levelling Up Fund’ – and the geographical areas it has picked to benefit. The fund is only £4.6bn, or on average £37m for each local authority targeted to receive it.

It seems obvious that such a scheme should be targeted at the poorest parts of the UK, which also happen to be those worse affected by the pandemic. But instead, one of the criteria that determines if an area is to be awarded money through the Levelling Up Fund is how geographically remote it is. Geographically remote areas can be more affluent areas, and are very often precisely those areas least affected by the pandemic. 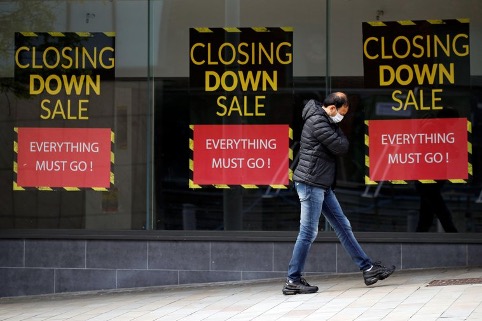 A man wears a face mask as he makes his way through Oldham, when the town faced a local lockdown in July 2020 [Phil Noble/Reuters/Alamy]

The Westminster government is talking the talk, but not walking the walk, on levelling up. The figures in Marmot’s latest report – and the personal tragedies behind each one – are terrible. But as Marmot has said before, it’s the longer-term, deeply worrying trends in life expectancy – especially for the poorest – that should demand our attention. These already required drastically different strategies from the government even before COVID hit.

COVID’s impact on life expectancy will not be permanent. Pandemics of this kind always end within a few years, and this one is likely to end a little faster, thanks to the rapid development of vaccines. And it will end first in affluent places such as the UK, where at least nine out of ten adults have some degree of immunity to the disease due to having been vaccinated or having caught the disease, or both.

But before the pandemic hit, as a February 2020 report by Marmot explained, the UK was already experiencing the first falls in life expectancy for 100 years – and these falls were not temporary. In fact, by 2058, one million people will have died earlier than they otherwise would have done, according to research my colleague Stuart Gietel-Basten and I published in 2017 using Office of National Statistics projections. We argued then that these falls were due to the austerity policies pursued after 2010, and the lowering of living standards that accompanied them.

To prevent this far more permanent impact on British life expectancy, we need action to turn the current social, economic and health direction of travel – action that starts now and continues over many years to come.

And as the short-term effects of COVID-19 on mortality rates – hopefully – recede, it’s also worth thinking about how any supposed ‘bouncing back’ in life expectancy might be reported.

In the 16 weeks to 18 June 2021, 5,979 people who died in England and Wales had COVID-19 mentioned on their death certificate. But despite that, overall mortality figures are in fact currently remarkably low: in those 16 weeks in England and Wales, some 9,790 fewer people died of any cause than the average for the same period in 2015-2019.

Writing in The Guardian, Professor David Spiegelhalter and his colleague Anthony Masters explained: “Of the deaths that we are not seeing, many are the shadows of those who were taken early.”

If the current trend within the UK of having both a low COVID death rate and a very low death rate from other causes continues, we may well soon see reports that life expectancy has suddenly ‘shot up’.

But comparing the worst months of a pandemic with the period immediately afterwards is clearly misleading. When life expectancy across the UK is reported to have risen in 2022, or possibly even in the latter half of 2021, the government will try to claim credit. At that point it will be crucial to compare life-expectancy statistics in the UK with that of other European countries and ask – why is ours still so low? And, why has life expectancy in the UK risen so very slowly since its 2014 peak in comparison to everywhere else in Europe?

The inequities and health effects that Professor Marmot has described are largely the product of a ‘devil take the hindmost’ political attitude, which has pervaded the Conservative Party since the 1980s. Many current government ministers, and the prime minister himself, have been – at best – relaxed about inequality since their teenage years in that decade. But it was, of course, the steep rise in inequality in the 1980s, and its persistently high levels ever since, that got us to where we are today – with poorer people and poorer regions so brutally exposed to both this virus and most other causes of preventable death.

Turning the trends around will require real, not fake, commitment, as well as huge effort and probably a great deal of time. I hope I see it happen in my lifetime. I do not expect to see it happen under the current administration.

For the original online version of this article, or a PDF of it, click here.