The pandemic had an almost immediate and massive detrimental economic effect on the lives of the already worst-off in the UK, especially for younger adults in precarious employment and, also disproportionately people of black and minority ethnicity had to more often borrow money to get by. However what was of overwhelming importance in determining who was most badly hit economically was whether a person already lived in a household that was rich, average, or poor.

A study published in January 2021 spelt out what had occurred in detail using figures of income carefully adjusted for the size of each household and the number of children in it, after taxes and including benefits. It showed that the average income of people living in the poorest fifth of households (lowest quintile) in the UK fell from £287 a week in February 2020 to £228 a week by May 2020. This fall, of over twenty percent, was larger than for any other quintile group and resulted in a huge and sudden widening of the gap between the best-off and worse-off quintile (fifth), which has probably not narrowed since then.

In contrast to what people in the poorest fifth of households, the best-off fifth received on average £765 a week in May 2020. However, the best-off had still seen an average fall of 11% in their income since February. Although only half the percentage fall of the poorest households – it will still have often felt like a great fall in income to them.

Each income quintile became less well off, but the gap between the haves and have-nots widened and this widening occurred despite a slight increase in welfare benefits for the poorest. The same study which revealed this huge and sudden increase in the already wide gulf between the best- and worst-off also revealed particularly acutely affected groups.

Within the poorest quintile of the population, roughly 13 million people, the quarter who had fared worst had lost 60% or more of their income in these two months, that was 3.3 million people in UK households which lost at least £172 a week. In contrast, the very best-off quarter of the already best-off quintile had seen their income actually rise by 8% or more over the same period; at least £69 more a week for the economically most fortunate 3.3 million people in the UK. The few economic winners from the pandemic were almost all people who were already very well-off.

At the most extreme, a tiny number became dramatically richer in 2020 by wining government contracts that were not properly put out to tender. As the BBC reported, among many other scandals: ‘The government has also been accused of favouring firms with political connections to the Conservative Party with a “high-priority lane”.’ However, most winners will have just been already well-off people who were able to take advantage of some aspect of the crisis. What matters is that it was mostly only a few people, from among the best-off fifth, who were best-placed to do this.

Other inequalities may have narrowed as the class gap widened. Men earned 9% more than women in February 2020, that gap fell to only 5% by May as more men saw bigger pay cuts, partly due to being furloughed more often. People who were of black and minority ethnicity were, on average, 27% less well off than those that were white in February – but that gap had also fallen, to 25%, by May 2020.

Your fortunes depend most on your social class, what kind of job you have or whether you do not have a job. Whether you are male of female has an impact, but it is small compared to class and it shrank as the crisis unfolded, despite the fact that women are more likely to be in jobs that are lowly paid, or not in work if a single parent of a young child. In May 2020 men in the UK were receiving on average £490 a week and women £467; but two months earlier those numbers had been £573 and £526 respectively.

The fact that the gender pay gap narrowed while the social class gap widened is because more men could be sacked or furloughed on 80% of their normal pay. This was slightly less likely for women because more women were doing work that had to continue. One very obvious example was working in health and care services, where women dominate.

The same pattern seen for women was also seen for individuals of black and minority ethnicity: their incomes were lower before the crisis began, fell during the crisis, but did not fall as much as for others. By May 2020 social class was 9.4 times more important than ethnicity in influencing income (235/25); before the crisis that difference had been nearer 7.4 times (200/37). Part of the reason was that people from ethnicity minorities, as with women, are more likely to be key workers. 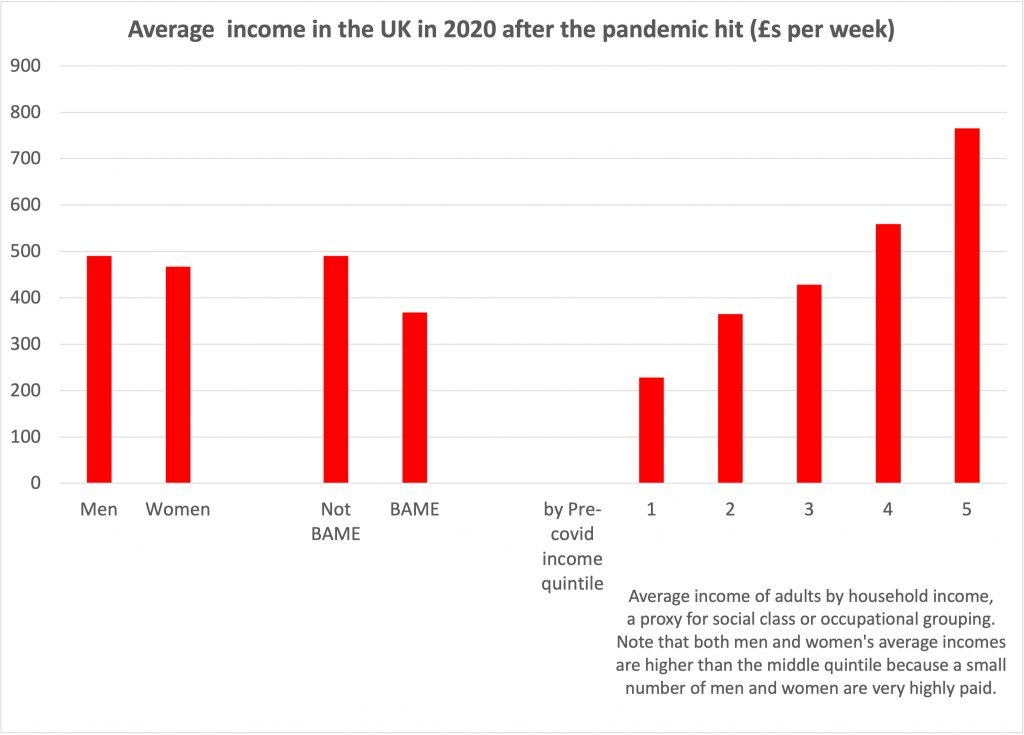 None of this should be that surprising. Within any ethnic minority group, just as among women, there is huge variation in incomes – whereas within occupation groups or social classes there is much less variation in income. However, what was perhaps unexpected was that the crisis should see the income gaps between men and women and ethnic groups narrow despite the income gaps widening overall.

Despite the overall narrowing of gender inequalities, lone parents – the large majority of whom are women – were especially badly hit. Their average household income was similar to the poorest quintile group. Most lone parents are in this income group, but they are often poorer than the group as a whole. Four out of ten lone-parents had to rely on gifts or loans from relatives at this time; and one in eight on a foodbank (compared to one in twelve for the poorest quintile).

Some 82% of the adults who went to food banks in April or May 2020 were women. Among couples it was almost always the woman who went to the food bank. Some 85% of people who went to food banks were white, a fraction less than the 90% of adults in the UK who are. Two thirds of foodbank users were in the very poorest quintile of income. Virtually none, were from the best-off 40% of households.

For a PDF of this article and a link to the original publication click here.