The rate of population growth is slowing – and it’s time for human activity to relax too. It’ll do our species so much good, says Danny Dorling. 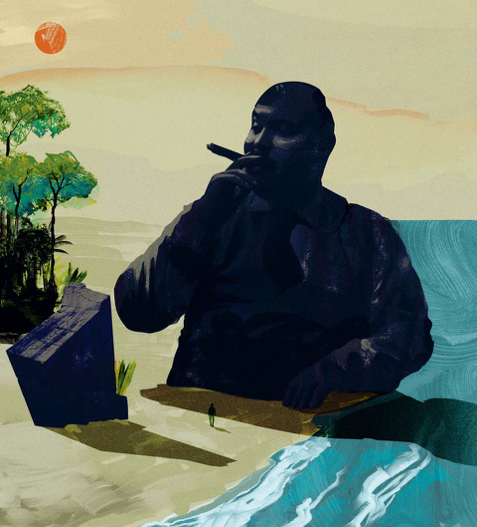 Outside the brief periods of population decline in wartime and pandemic, population growth rates have exceeded one per cent every year since 1901. However, according to the latest UN estimates they will now almost certainly fall below that level by 2023, then quickly drop to below 0.9 per cent annual growth around the year 2027, and then fall not quite as rapidly. The current pandemic is unlikely to alter these figures. By late April, approaching 0.003 per cent of the population of the world had died due to Covid-19.

If the numbers we collect about ourselves could speak, perhaps they would say: “We have given you all the information we have and given you all the options; if you humans don’t slow down, you are finished.” We should now mostly know what we have to do and what resources we have to do it with. There is no sudden ship of technological marvels about to appear over the horizon to save us.

The big economic wheel keeps turning and its central axis is moving, but a slower set of gears is engaging and soon it will slow to a stop, even reverse. Disaster capitalists – those who came to believe in the cult of creative destruction – hate not having a choice to continue as we are. But we don’t.

Although we don’t know for sure what will happen between now and peak human (the day after which the total number alive begins to slowly fall), we can now work out what can’t happen. When the capitalist transition began, we believed that the world was at the centre of the universe. As the transition accelerated, we learned that there might not be a god or gods. Each generation had so much to learn.

Hopefully, in future, we will no longer have to wind down simply to cope with having become so wound up

When the capitalist transition started there was no single key economic centre to the world and there will very likely be no single key centre when the transition ends. We should not concern ourselves with what country will be hegemonic in future. We don’t have to worry about whether Beijing will take over from London and New York. Such questions are questions of the past; questions that mattered greatly at the height of the age of transition.

Today the shock is not change. The shock is when the change stops. When the cranes are taken down, and we are building mostly to repair and renew what we first built a long time ago. The shock is that we are no longer expanding, and no longer seeing a geographical shift to a single new centre of dominance. However, as we adapt to slowdown, we may not sense that our pace of change is slowing.

Everything is relative. Even the feeling of time passing is relative. When you are young, your summer holidays feel like they go on forever. When you are old, you wonder where all the time went and why birthdays come around so quickly. No wonder we cannot easily see that slowdown is occurring. And just as we find it hard to understand change, so too will we find it hard to understand a state of very little change – until it becomes normal, until the stories we tell fit the times we experience.

Hopefully, in future, we will no longer have to wind down simply to cope with having become so wound up. We do not know what will happen, but to achieve a better future we must first imagine it. Slowdown means the end of rampant capitalism. It never could last forever, based as it was on the expectation of continually expanding markets and insatiable demand, and its creation of a bizarre concentration of wealth that has made a mockery of democracy.

Great economic inequalities will be very hard to sustain during and following the slowdown. As things change less, it will become much more difficult to make money out of a shrinking and ageing population who may also become savvier and harder to fool with the allure of the ‘new’ – as well as the world’s gold or its fine pearls. Most advertising aims to persuade us that we want what we do not need; we must buy it, or at the very least covet it and despair if we cannot even dream of having it. However, now that more and more people study psychology and the social sciences and have greater numeracy skills, fooling the majority will become harder and harder to achieve.

Slowdown gives us time to worry more about one another and less about what we will ourselves receive in future. Slowdown means more time to question all that our grandparents never had time to question, because they were dealing with so much that was new.

Slowdown means goods lasting longer; it means less waste. It means that many of the things that we currently think of as great social and environmental problems will not be problematic in future. We will, of course, have new problems – most of which we cannot even imagine right now. And we will, of course, do things we have always done, things that right now we long for.

Slowdown: The End of the Great Acceleration – and Why It’s Good for the Planet, the Economy, and Our Lives by Danny Dorling is out now.