My father still remembers the H3N2 influenza pandemic of 1968 when over a million people died worldwide. He remembers being too ill to get out of bed to tend to me, then an infant; but within a decade of that event it had been largely forgotten by most people. His father was a teenager during the 1918 H1N1 Influenza pandemic and thus at risk; but it had so little effect on my grandfather’s life that he never talked of it. Will Covid-19 be different?

The number of people who are dying today is small as compared to the 1968 pandemic, which was itself much smaller than that of 1918. However, thanks to improved public services and living standards a far higher proportion of the population are elderly today. We also tend to face much lower general risks. And so a pandemic today can become all consuming. It also more clearly reveals our deficiencies than pandemics did in the past.

In January 2020 the UK had five times fewer ventilators per person at risk than did Germany. The UK had been spending roughly a billion Euros less a week on its health services as compared to Germany. It was also possible that the UK had far fewer very frail people at risk, because so many more have died in recent years from austerity. When this is all over we in the UK should compare ourselves to Germany and ask why we could not plan as they did?

So what did we do? After weeks of inaction, on Wednesday March 11 ‘… some of the experts on the government’s Scientific Advisory Group for Emergencies began to realise that the coronavirus was spreading through the UK too fast for the NHS to cope’. Others did not realize it was so serious at that time and it took a few more days to convince them. For example, on March 22nd the Times Newspaper reported the chief advisor to the Prime Minster, Dominic Cummings as stating “…if that means some pensioners die, too bad.”

On Thursday March 12th as the Financial Times has explained, the Prime Minster told the ‘…British public to prepare to “lose loved ones before their time” [but] said he would not follow the example of Ireland and Italy and close schools and ban sporting events to limit the spread of the disease.’ On March 21st a journalist in the Daily Mail, upon seeing all the evidence laid out before, said: ‘I see very little evidence of a pandemic’. He also wrote that ‘every human being in the United Kingdom suffers from a fatal condition – being alive.’ That journalist helped illustrate why much of the UK government and its advisers and people of his political persuasion do not understand collective risk and what matters most in life. This we must not forget. Such people will be around saying much the same things next time; but if we remember we can be better prepared for their views.

That same week a fund manager wrote ‘…Coronavirus has a mortality rate of less than 5%, so it isn’t going to be the end of the world.’ True, but who would image a few million less than 300 million dead as ‘not the end of the world’? A few days earlier, a market analysis had complained that panic had been caused by politicians because ‘…news which is likely to foment volatility is better delivered after market hours.’ Yes, someone did really say that! And then he went on to suggest: ‘There is indeed a virus among us, one far more damaging than that which goes by the name COVID-19.’ By this he meant people with different political views to himself!

It is very possible that too many people who held extremely individualistic attitudes, and valued older lives very lowly in the UK and USA held positions of influence in 2020. Time will tell, but if this is one lesson that we learn it is a lesson we ned to remember well.

On April 4th, as the situation began to settle, an esteemed Professor of Statistics suggested that: ‘if COVID deaths can be kept in the order of say 20,000 by stringent suppression measures, as is now being suggested, there may end up being a minimal impact on overall mortality for 2020 (although background mortality could increase due to pressures on the health services and the side-effects of isolation).’ It is worth comparing that number to the 55 times higher estimate of the 1,110,332 dead if we “did nothing” scenario that had been published just a few weeks earlier. We should try very hard to remember how we were flying blind when all this began.

So what are we beginning to learn. One lesson has been that the number of people who died in each country in Europe depended (to an extent) on the prior living arrangements in that country – most importantly the extent to which mean old and young tended to live together, which varies markedly across Europe. In March, for those tested as having the disease, the mortality rate report across Europe varied from 9% per infected person in Italy and 6% in Spain, to as low as 0.4% in Germany; and 0.3% in Norway. These are all now much lower as the numbers of people tested rise and as people showing fewer symptoms are tested.

So why do I worry about us forgetting the lessons? It is because we did so before, and because we forget that we forget. I’ll end with two graphs. The first I drew on March 28th 2020. It showed what appeared to be exponential rises in mortality in Europe, because at that time mortality was rising exponentially in Europe. Although note that the mortality rates were very low. We should remember that we were once this frightened. 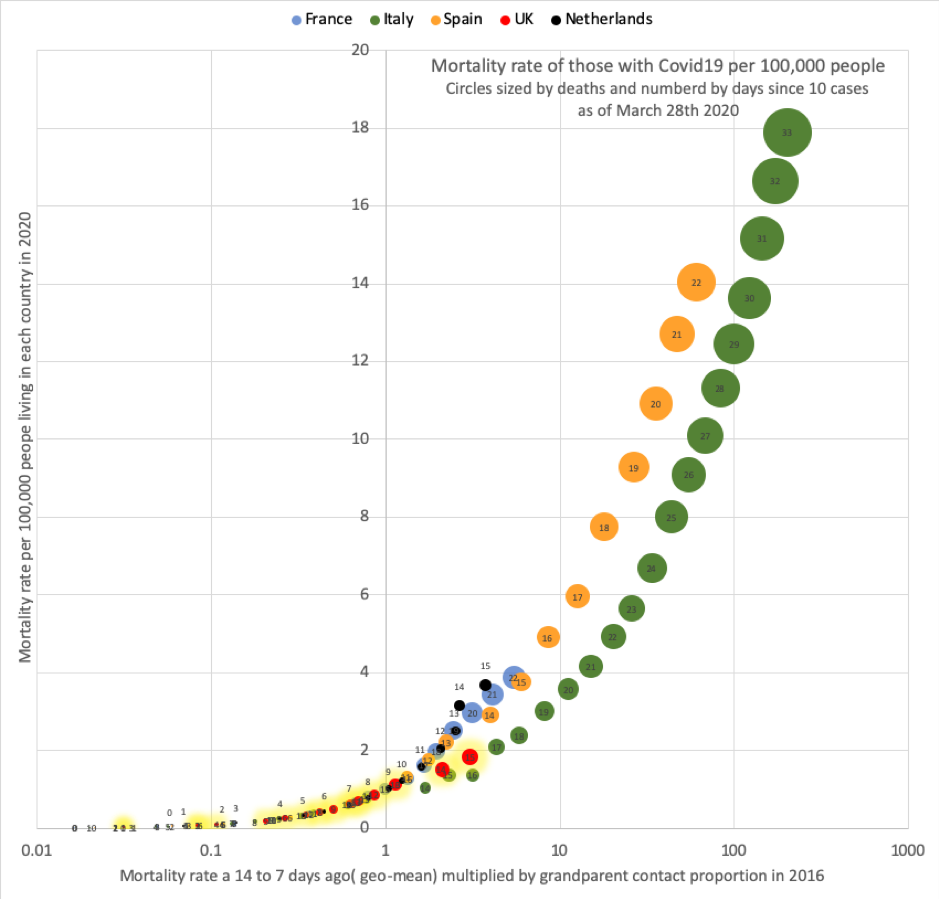 The second graph shows the proportion of grandparents who tend to spend at least several days a week caring for their grandchildren in different countries in Europe. Often this was because they lived in the same household. If Covid-19 got a hold in a country, and that was a country in which grandparents often lived with grandchildren, then because the grandchildren were sent home from school infection rates could initially increase. By April 8th the highest numbers of deaths in Europe had been reported in Spain and Italy; with twice as many dying in Italy than France; and almost fifty times fewer dying in Denmark than France. 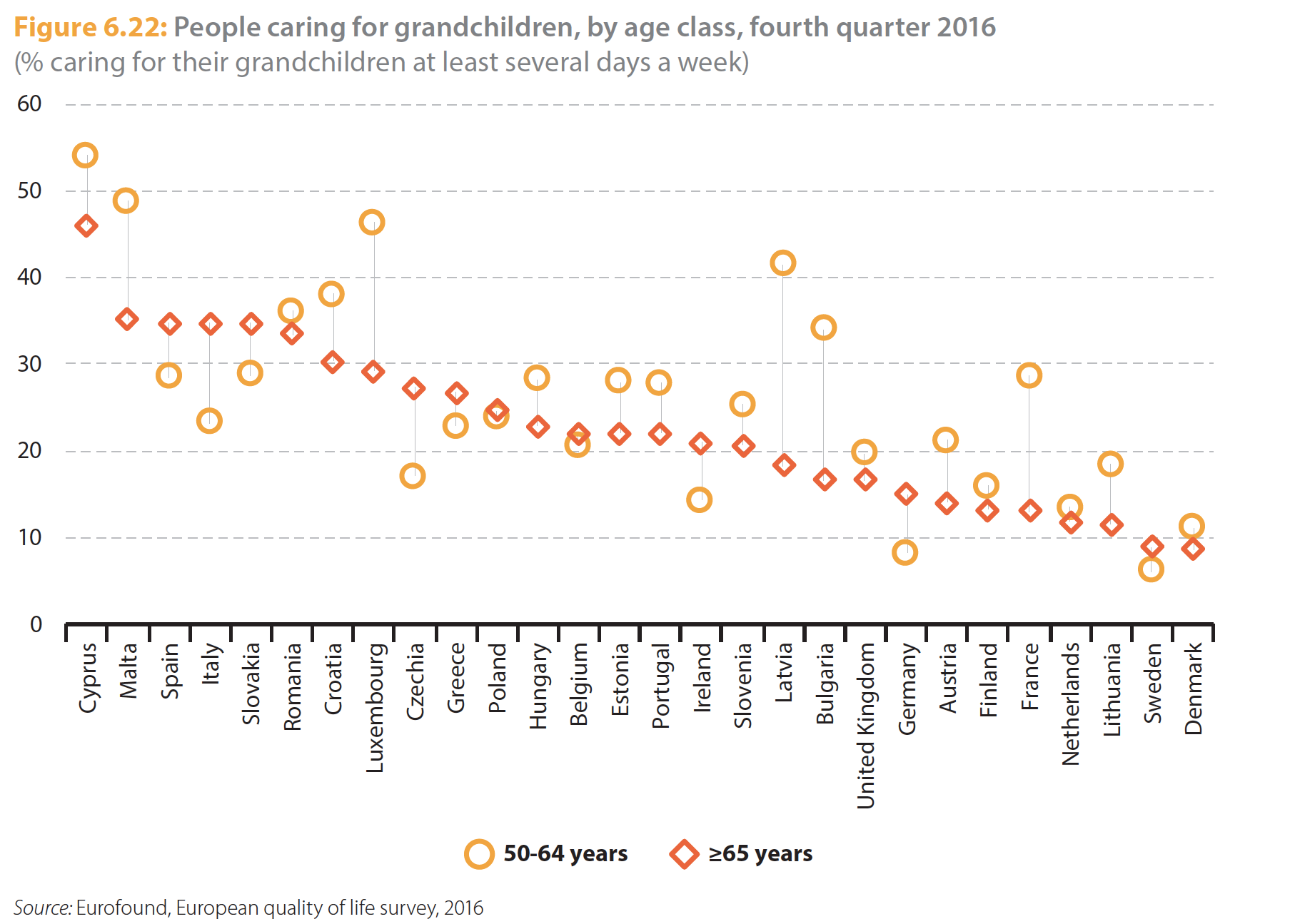 Grandparents caring for grandchildren for several days a week (% in 2016)

There are a lot of lessons to learn, but chief among them is not forgetting what this felt like at the time. We were, after all, expecting a pandemic – we had been for years. So why were we so badly prepared? And what did we think was so important that we could not act more sensibly, more quickly and with better hindsight. We cannot justify making so many mistakes again.