Why do people vote for politicians and rhetoric which actually puts their own lives at risk and what can be done about it? On 25 June 2019 Jonathan Metzl and Danny Dorling were asked to consider how politics in the US and UK is failing the people who most need help. They both spoke at a public meeting in the town hall of the city of Durham. The meeting was chaired and introduced by Dr Angela Woods of the Wolfson Research Institute for Health and Wellbeing, University of Durham. An audio recording is below. 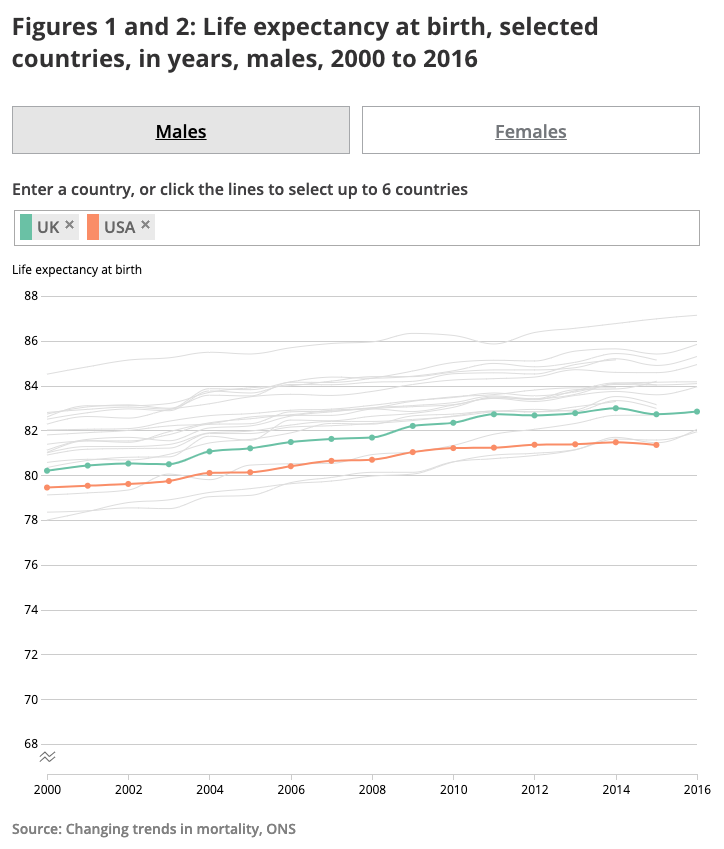 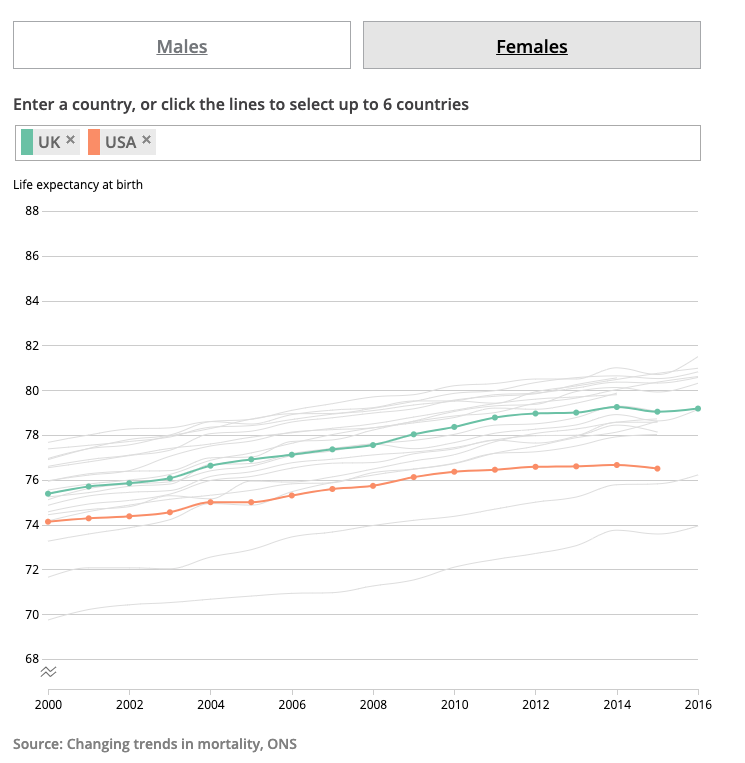 The source for these graphs and the ONS data behind them can be found here. ONS base their estimates on the Human Mortality database, the best international source of comparative data on life expectancy. Note how every other line for every other country in the comparison is either already above the UK and USA or is rising rapidly towards soon overtaking these two unusual states.

The data released by ONS, and used by them to make the two charts shown above, can also be used to look at changes in life expectancy over time. The two tables below do this for all those countries for which data up until 2016 is included. It is clear that for both men and women the UK has the worse recent record of all ten countries ONS has compared up until 2016. The two tables below sort these ten countries countries from that experiencing the largest fall (the UK in both the cases of women and men) to largest rise of the most recent change (Japan and Norway respectively):

Note that an earthquake off the  coast of Tōhoku of magnitude 9.0 occurred on Friday 11 March 2011. On  Thursday 7 May 2015 a new government was elected in the UK.

Note that an earthquake off the coast of Tōhoku of magnitude 9.0 occurred on Friday 11 March 2011.On  Thursday 7 May 2015 a new government was elected in the UK.

Even small changes in lie expectancy between years, let alone pairs of years are almost also significant changes other than for the smallest of pacific islands with very low total populations. To quote from those who know: “Life expectancy statistics are almost never presented as interval estimates (i.e., with confidence bounds). For national-level populations, life expectancy is very sharply estimated. Except for the smallest countries, population size and deaths are large enough that the confidence intervals are so narrow as to be unhelpful, and are therefore omitted.”

ON June 1st 2019 the Guardian newspaper reported, quoting IPPR research, that “More than 130,000 deaths in the UK since 2012 could have been prevented if improvements in public health policy had not stalled as a direct result of austerity cuts, according to a hard-hitting analysis to be published this week.” Prevented, of course, means, delayed and people could have lived a little longer. Had they each just lived a few months longer life expectancy in the UK would not now be falling.

Earlier Lu Hiam and Martin McKee, writing in the BMJ, had explained that more recent data than that released by the ONS to date had revealed that “Life expectancy in the UK has fallen, again. The trend that started in 2010-2011 has worsened. The total fall in life expectancy compared to 2015 projections is 13 months for men and 14 months for women.”

Infant mortality has also been rising steadily now in the UK and has stopped falling in the USA for for some time now. Thankfully this is not the reason why the life expectancy figures are falling in both countries but infant mortality rates, although now continuously rising in the UK, are still historically low.

Why do people vote for politicians and rhetoric which actually puts their own lives at risk and what can be done about it? Join Jonathan Metzl and Danny Dorling to consider how politics in the US and UK is failing the people who most need help.

In his latest book ‘Dying of Whiteness’ Jonathan M. Metzl travels across America’s heartland seeking to better understand the politics of racial resentment and its impact on public health. Despite Trump’s promises to restore greatness to white America, Metzl’s systematic analysis of health data dramatically reveals they did just the opposite: these policies made life sicker, harder, and shorter in the very populations they purported to aid.

In contrast, Danny Dorling’s work considers key inequality issues in the UK including politics, housing, education and health. In the book ‘Peak Inequality’ he explores what the future holds for Britain, as attempts are made to defuse the ticking time bomb while we simultaneously try to negotiate Brexit and react to the wider international situation of a world of people demanding to become more equal. 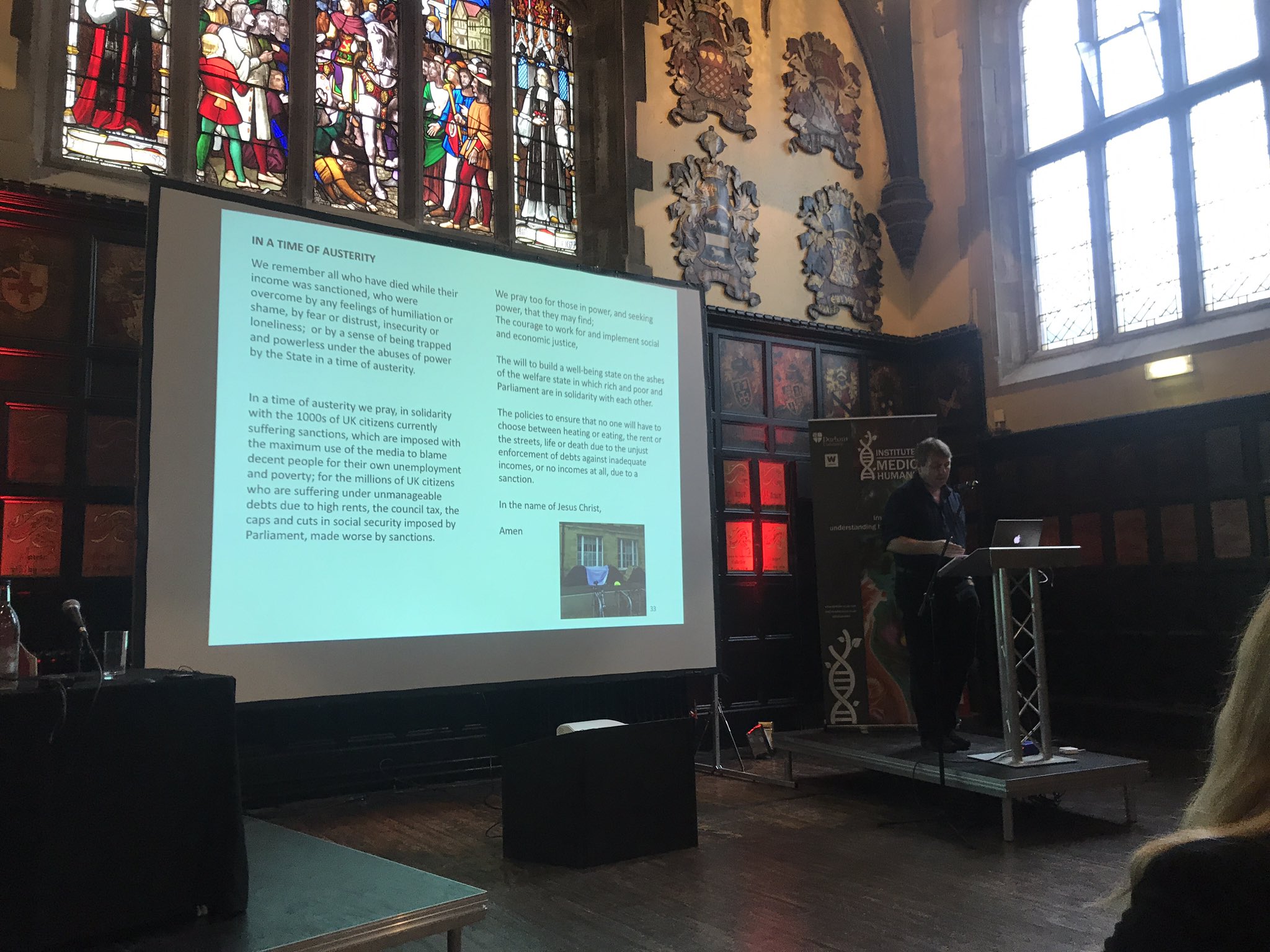 In a time of austerity: we pray

A PRAYER IN A TIME OF AUSTERITY

1000s of UK citizens currently suffering sanctions,
which are imposed with the maximum use of the media
to blame decent people for their own unemployment and poverty;
for the millions of UK citizens who are suffering under
unmanageable debts due to high rents, the council tax, the
caps and cuts in social security
imposed by Parliament, made worse by sanctions.

We pray too for those in power, and seeking power, that they may find;
The courage to work for and implement social and economic justice,
The will to build a well-being state on the ashes of the welfare state
in which rich and poor and Parliament are in solidarity with each other.
The policies to ensure that no one will have to choose between
heating or eating,
the rent or the streets,
life or death
due to the unjust enforcement of debts
against inadequate incomes,
or no incomes at all,
due to a sanction.
In the name of Jesus Christ,
Amen

[a prayer penned by the Reverend Paul Nicolson. Reproduced here with permission from N. Paynter, In the Gift of this New Day: Praying with the Iona Community (Glasgow: Wild Goose Publications, 2015). It was first said outside the DWP Headquarters, Westminster, 19 March 2015, at a demonstration called by UNITE Community, with the relatives of people who had died after their income was stopped by a job centre sanction.]