Geographers are able to combine complex statistical data analysis with a human sense of real problems in the here and now. Geographers have a sense of the practical and the immediate. And they are adaptable. Their academic subject has transformed completely in the space of just one hundred years.

Geography was founded as a discipline in Oxford to teach young men what they needed to know to both run and expand the British Empire. That is why the chaps had to know all about maps, rivers, where different crops came from, how cities could be managed and whole peoples subjugated. With the demise of the Empire the discipline needed a new focus.

When I was a schoolboy physical geographers taught me that the next ice age was coming. It was coming imminently they said. When I was at university they used to climb mountains to measure glacier advancement, and were shocked to find that the glaciers were retreating – we forget how recently the large majority of us learnt that the ice age was not then just beginning – what only a tiny number suspected in the more distant past.

When the almost certain inevitability of disaster is finally realised by elites then, and only then, is action taken. It takes the work of millions of others to convince those elites. The folly of holding nuclear weapons was understood before 1945, but it took 40 years to begin to disarm the world of nuclear weapons. Now, almost ninety percent of what were held in 1985 are gone. Enough remain to annihilate us many times over. But this reduction shows what is possible.

Human geography can find many lessons from many places of how often change is generational. The next generation can behave remarkably differently from the last.

Stan Openshaw, my PhD supervisor in Newcastle University, was among the first to calculate that as many as thirty million people would be dead or dying within weeks of a nuclear attack. Until those calculations were published the British government was still quietly planning for a survivable nuclear war. Soon after publication they secretly decommissioned the vast majority of Britain’s bunkers in the early 1990s.

Old problems never go away, they are just superseded by new fears and even greater potential threats.

Thanks to yet more careful current calculations we now know the top 10% of people by income pollute the atmosphere dramatically more than the rest. We also now know that in countries with more equitable income distributions everyone, including the rich, behave far better and consume and pollute far less. Reducing economic inequality is key to facing up to climate breakdown.

If everyone in the world behaved as they behave in the USA, we would need four planets. If we all behaved like Japan we would need two. Still one planet too many, but dramatically different. By far the fastest way to reduce carbon pollution is to reduce income inequality. Income inequality is now falling in more countries than it is rising, including in the majority of OECD countries. The international peak of income inequality worldwide was reached in 2013.

There is so much to be done. The vast majority of people in the world who need to be convinced to eat no, or less, meat live in just a few affluent countries: mostly in the USA, Europe and China. There are almost no vegetarians in China now. But within a generation revolution is possible. The Chinese know this far better than the British (who have never been very good at revolution). We are very fortunate that meat is not very good for any of us to eat. But we only recently learnt that too.

Where countries fi nd themselves now is often a product of circumstance and past activism. To know what is possible Geographers can highlight the best and worst examples to be observed and studied. The United Provinces, part of what is today the Netherlands, were one of the richest places on earth before the rise of the British Empire. Take a look at what the Netherlands achieves now when it comes to green transport, and how inadvisable it is to try to emulate the economics and politics of the USA (figure below): 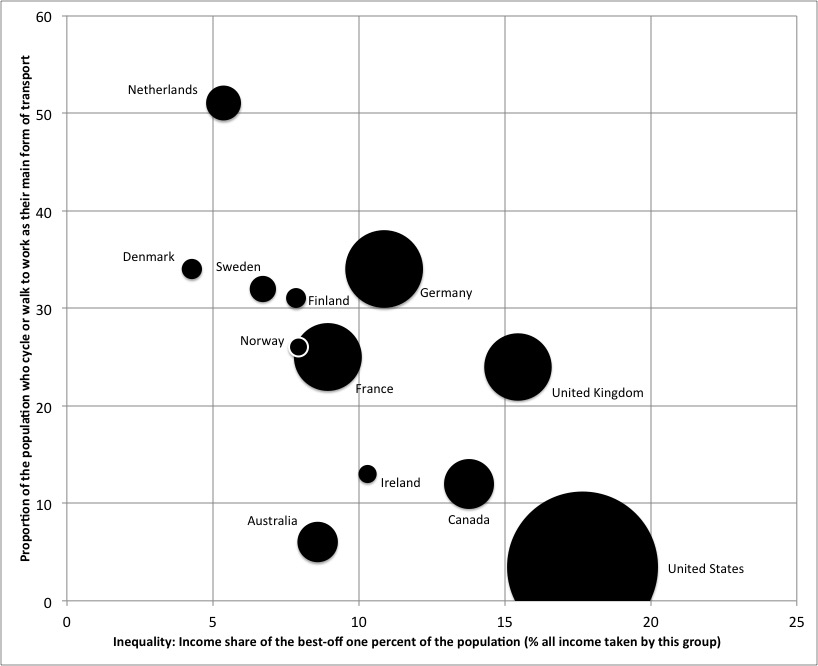 Within the UK, Oxford is fortunate to have been constrained by a very tight greenbelt. This means that it is now possible, if there is a will, to transform Oxford into the UK’s greenest city, using examples from the Netherlands. Oxford could expand its population and reduce its reliance on cars at the very same time if it built around the edge of the city and reconfigured its transport system towards walking, or cycling and in favour of buses and, eventually, trams. It could be the Freiberg of the British Isles. Freiberg is home to roughly 75,000 more people than Oxford is. It shows how Oxford could expand sustainably.

Alternatively we could support the building of the first quarter segment of the outer M25. Otherwise known as the Oxford-Cambridge ‘expressway’. This is not a terribly hard one to call, but currently the university’s stated position is in favour of the expressway. Clearly human geographers are not working hard enough to help explain why this is such a bad idea. A new train line to Cambridge is fine. A new motorway is folly, it will encourage car dependent building in the countryside and even greater pollution than we have now, out of the urban heat islands. 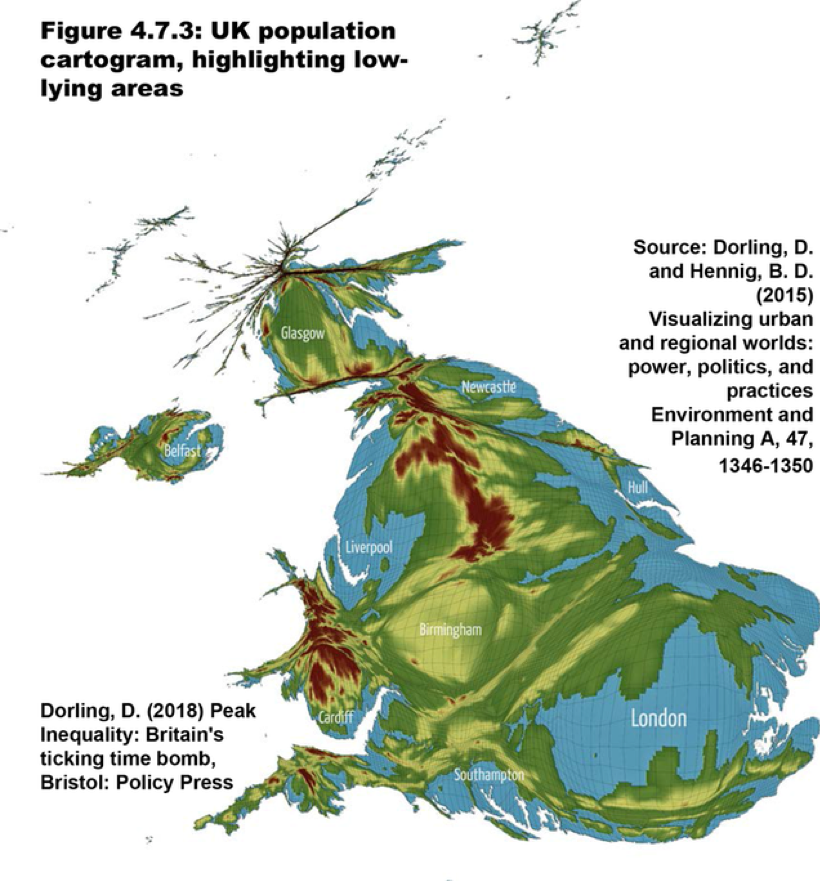 If you draw a map where area is proportional to people you can see how many people are effected when you then raise the sea level (figure above). You get a very different picture on a human geography map, in place of the traditional physical one you saw at school, where only a few small areas are affected. Sea level rise may only affect a few areas, but a huge number of people live in those areas. The rise might be inevitable, but we can reduce its effects.

For example, it is a good idea to build a flood relief channel to the west of the Oxford city centre, as we are currently doing, to move water further down the Thames when there is too much flowing into Oxford. But it is also essential that we ensure that the fields further up the Thames and Cherwell catchments are not drained so quickly into those rivers, so that these flood events become rarer. Farmers’ fields need to hold more water when there are downpours, like they used to. If we don’t do this, then once the channel is in operation Abingdon and then Reading will simply flood more.

Later, settlements downriver of Oxford will then get their own flood relief channels and all the water will head at even greater speed and volume towards London, perhaps just at the right time to meet the spring tide coming up the river Thames. Could we have avoided all this if only a few more people had studied geography at university, and so many geographers had not become bankers upon graduation? All this is a long way from rocket-science. And all of it is possible. Oxford could be the greenest city in the UK, even in Europe. It is just a case of knowing your geography.

The illustrations in this article appear in colour in Dorling, D. (2018) Peak Inequality: Britain’s ticking time bomb, Bristol: Policy Press and can also be seen for free here.

Click here for a PDF and link to the Oxford Magazine (where this article originally appeared). 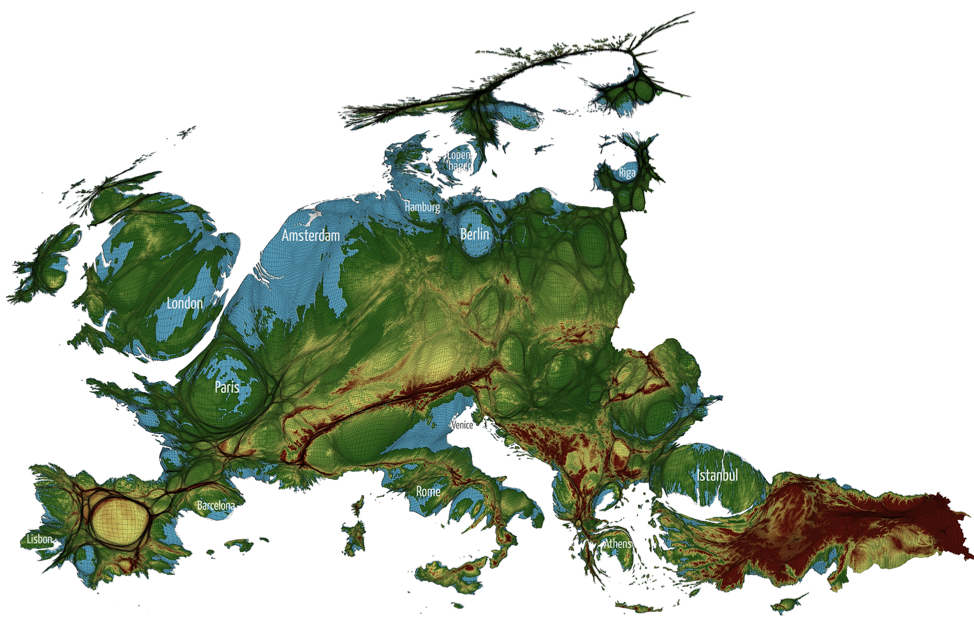