Hidden in the detail of these figures was the news that Britain’s finance and insurance industries had shrunk, albeit only by a tenth of one percent. While the rest of the UK economy was growing, very slightly and slowly – more slowly than in recent years – growth in finance and insurance activity was negative.

The size of the contraction in these industries in the last quarter was roughly half of that in public administration, which has continued to be squeezed by public spending cuts. Most recently, it was reported that Northamptonshire County council will be making future cuts of up to £70 million. When the cuts in public sector spending were announced, the BBC reported one protestor as saying: “When people die this winter, because they will die this winter, the blood will be on your hands.” Contraction often occurs through a thousand small cuts.

Unlike public sector cuts, which have immediate and obvious effects and result in protests reported by the BBC, the contraction of the finance and insurance industries in the UK takes place very quietly. It is not in the interest of the banks to point out who among their staff is moving to Paris or Frankfurt or Amsterdam and whether it is the younger bankers and lawyers without families who are moving first. And it is not in their interest to point out that they are now paying themselves less, as most people still understand that the highest paid bankers have been paid far too much. But hidden in today’s ONS report is yet more evidence of the contraction of what had been the UK’s most successful industry.

read more posts on this topic here, and see the PDF and link to original blog this post is based on. 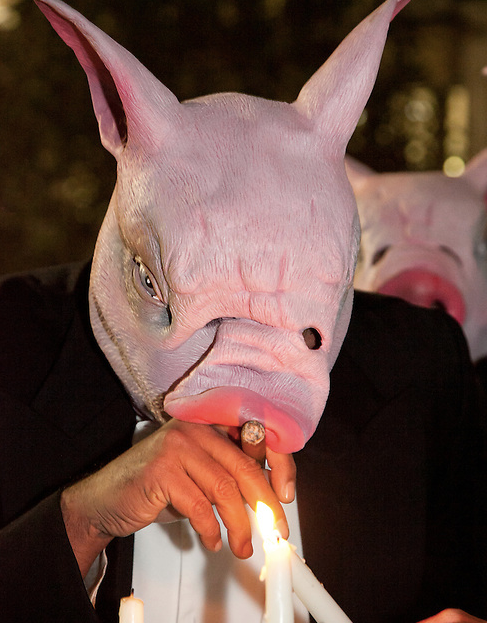 Taken by Kristian Buss
on 14 November 2011 in London. The photo shows partygoers from
the fictional Swillindon club, who tried and failed to gain entry
to the Lord Mayor’s Banquet that evening