For years schools have been sending pupils the message that women are worth less than men. It’s our moral duty to fix that.

The cult of the macho “strong leader”, which dominates education, has been damaging in so many ways. I always seem to be reading fatuous accounts of the apparently super-human workloads of our academy trust principals and university presidents. They rise at 5am to lead their institutions forward with an hour of emails, followed by breakfast meetings, and fall late into bed having worked tirelessly all day for their underlings. It is narcissist guff and to most of us is unimpressive, but given how much educational leaders pay themselves, it is perhaps not surprising that they try to justify their worth in this way.

But perhaps the worst effect of the “strong leader” has been the resulting failure to address the gender pay gap. It is through pay that we demonstrate exactly how much we respect each other. Pay is always about respect.

Writing in the Guardian recently, Fran Abrams revealed that the gender pay gap within the first 40 academy trusts to report under the new legislation was 19.5% – much higher than the 11.8% average for the first 1,000 institutions that filed their reports.

Experts said this was not surprising, “as schools have large low-paid workforces of classroom assistants, lunchtime supervisors and cleaners which are largely female”. However, almost all companies have cleaners, so that is hardly an excuse for why schools pay men so much more. 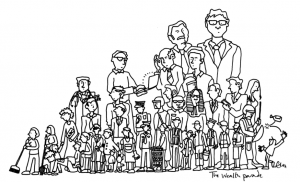