Who are the unvaccinated and what is happening to them?

Who are the unvaccinated and what is happening to them?

On 21st September 2021, the Office for National Statistics (ONS) produced a report with the cheery title: “Deaths by vaccination status, England”. The purpose of the report was to ascertain how well the vaccines against Covid-19 were working, given that their primary aim was to prevent death. The conclusion was unequivocal, 99.1% of all deaths that occurred in England between 2nd January and 2nd July 2021 that had involved coronavirus, occurred to someone who had not been double vaccinated for at least 21 days.

The bulk of the ONS report understandably concerned the very small chances of dying from COVID-19 that double vaccinated people still faced. While these chances are miniscule, because most adults are now double vaccinated a growing proportion of deaths involving coronavirus would be expected in future in those who are double vaccinated.

As there is reticence among certain groups of people to take the vaccines, it made sense for the ONS report to concentrate on the relative risks. One could then work out how much less likely people are to die of this disease, if they are vaccinated. But to be able to do that you have to both be aware of where the data is behind the report and know something of how age-sex standardized mortality rates are calculated; a skill which only a tiny proportion of the population of England have ever been taught.

But what else can we work out about the group of people who are still largely unvaccinated? This is estimated to include about a million people aged over 60 who are not fully vaccinated and, because of their age, are now at the greatest risk from COVID-19.

The ONS report suggested that in England, irrespective of their age or sex, in the two weeks ending 2nd July 2021, completely unvaccinated people were ten times more likely to die of the disease, as compared to fully vaccinated people. By the end of those two weeks, 23.3 million people had had their second dose but 9.5 million adults were still unvaccinated. These included a very large number of younger adults, some of whom were only just being offered an appointment for a first dose.

The story above is perhaps what you might expect to read, if you had been following the reports and news, and knew something of vaccination, acquired immunity, and also how immunity wanes over time. However, what was perhaps more surprising was not the mortality rates from the disease, but the mortality rates of people dying in these same two weeks of something not at all connected with COVID-19. In the two weeks ending 2nd July 2021, people who were unvaccinated were between 1.6 and 1.8 times more likely to have died of a cause entirely unrelated to COVID-19, as compared to those who had been fully vaccinated. 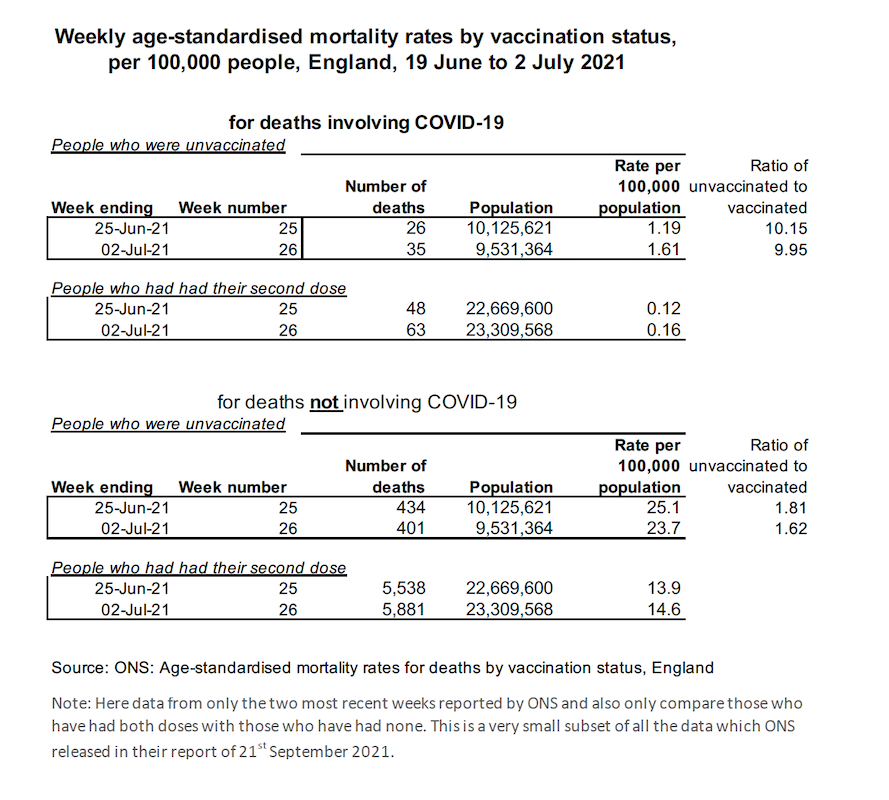 Note: This is a very small subset of all the data on the first six months of 2021 which ONS released in their report of 21st September 2021. It covers only the last two weeks and also only compares those who were fully vaccinated with those who had had no COVID-19 vaccine.

No one has suggested that the vaccines are protective against other diseases, so why are people who have taken the vaccines so much less likely to die of other causes (after having taken their age and sex into account)? The answer is almost certainly mainly ‘deprivation’ – the overall most important cause for increased mortality and reduced life expectancy. People who have not taken the vaccines are also so much more likely to be poor, on average, as compared to those who have, which is why their chances of dying in general are almost twice as high as for the fully vaccinated.

In the two weeks ending 2nd July 2021, some 11,419 fully vaccinated people in England died of something that did not involve COVID-19 at all, as compared to 111 where COVID-19 was mentioned on their deaths certificate (but not necessarily as the main cause of death). In contrast, in those same two weeks, 835 non-vaccinated people in England died of a cause unrelated to COVID-19 as compared to 21 who died with mention of COVID-19 on their death certificate. These latter numbers are lower because far fewer people are unvaccinated and the unvaccinated tend to be younger. However, once those factors are allowed for, the unvaccinated are not just 10 times more likely to die of COVID-19; but they are also 1.6 to 1.8 times more likely to die of something unrelated to COVID-19!

Why then do some people, and especially poorer people, not take the vaccine when offered? The reasons will vary greatly between individuals and are likely to be complex in some cases; but a general distrust of authority may well be key. Why trust a government that so clearly does not have the interests of poorer and marginalised people at heart in so many other ways? When they suggest you do something not just to help yourself but for the greater good, why trust them? If the government are clearly not very interested in people like them, some will ask: does it have an ulterior motive here?

We also have to consider fear of vaccines, beliefs in conspiracy theories, and a dislike of coercion. But with a disease that has now become endemic, the case for taking the vaccine, especially if you are old, becomes stronger. However, you must balance that with poorer people’s actual experiences. Some might say that given how much more likely they are to die young of so many other things, why bother? In those two weeks, less than 2.5% of deaths in the unvaccinated saw any mention of COVID-19 on the death certificate. If you are poor, and struggling to cope, and have many more things to worry about, taking a vaccine offered by authorities who appear to be doing so little to help in so many other aspects of your life, is not an obvious priority. I would urge people to take the vaccines when offered; but I can easily see how mistrust can grow.

for the original article, and links to where first published, click here.